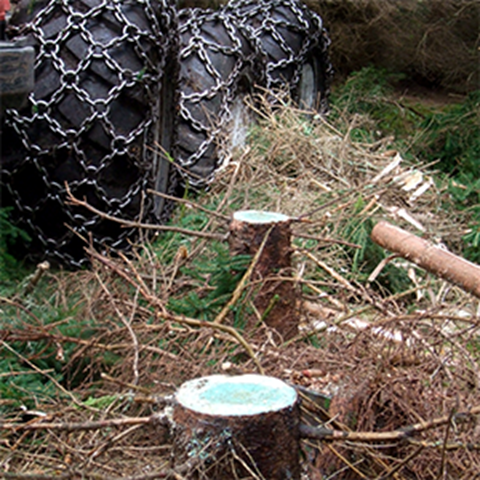 The fungus Heterobasidion annosum is the most destructive pathogen in boreal and temperate conifer forests of the northern hemisphere. In Sweden, as much as 15% of Norway spruce trees present symptoms of decay. Today, a biological control method is used in which spores of the fungus Phlebiopsis gigantea are sprayed onto felling stumps to prevent the rot from spreading.

The pathways of infection of H. annosum, through fresh stumps and via the root systems into neighboring trees, have been known since the 50's. These insights made it possible to try to limit the spread by treating the stumps in connection with thinning or felling.

Previous methods had a negative impact on the environment

The first successful method was to chemically treat the stump change with urea or boron to raise the pH and prevent fungal spores from growing. The method became commercial in the late 1980s and was an effective treatment method, with slightly higher effect on pine than spruce. However, it also had a negative impact on the environment around the stump. It is therefore forbidden today.

In the 1990s a new method was deleloped to reduce the spread of root rot through stumps. Today, this method is the only approved and furthermore the most effective control method for reducing the spread of root rot. It is an aqueous solution of spores from the fungus Phlebiopsis gigantea, which is sold commercially under the name RotStop.

Phlebiopsis gigantea is a so-called saprophyte, i.e. it effectively colonizes dead wood, but it does not damage living trees. It is also an antagonist against H. annosum, and prevents the rot from taking hold on to the stump.

In stumps treated with RotStop immediately after harvesting, it has been calculated that the amount of H. annosum is 185 times smaller than in untreated stumps. Of the stumps that are not treated at all, about 80% are infested with H. annosum three months after harvesting, compared with about 30% for the treated.

However, it is important to cover the entire stump to achieve the desired effect; Phlebiopsis gigantea slowly spreads to uncovered stumps and gives the rat dick the chance to colonize. If the degree of coverage decreases by only 20 percent, the amount of root rot in the stump doubles, while the amount of Phlebiopsis gigantea decreases to one-seventh.

Other fungi can change the outcome

Other fungi can also affect how effective the treatment will be. The common fungus Fomitopsis pinicola, for example, seems to be an antagonist against Phlebiopsis gigantea and complicates its colonization of the stump, which of course increases the risk that the root rot colonises the root system.

It is recommended to treat all of the stumps in connection with thinning in the summer.