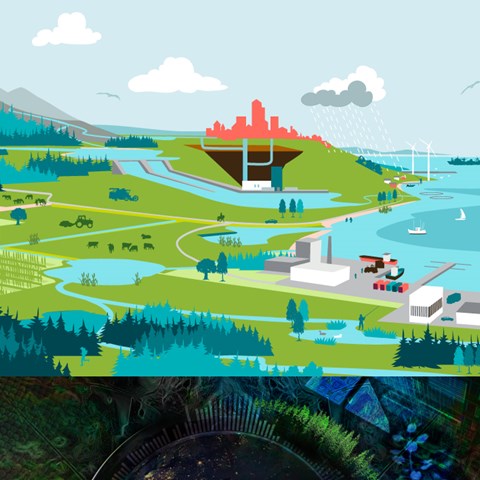 At SLU, we conduct research on water in forest, agricultural and urban landscapes, drinking water, reuse and cycling of water, aquatic and fish ecology in lakes, watercourses and seas, bio economy, management and much more. Watch our videos about water!

The film about SLU - water and environment (in Swedish) is one of the five thematic films that SLU has made based on material received from students and employees.

Smarter methods for avoiding damage to the ground caused by machines and better edge zones along water are issues that the researchers focus on in the forest landscape. Watch the film Skogen och vattnet (in Swedish), one of five short videos from the research program Future Forests.

Lenka Kuglerová is a senior lecturer at the Department of Forest Ecology and Management. Lenka and her colleagues study how small watercourses can be protected during forestry. Watch the film Kantzoner skyddar vattnet i skogslandskapet (in Swedish).

Hjalmar Laudon is a professor in forest landscape biogeochemistry at the Department of Forest Ecology and Management. Hjalmar and his colleagues study chemical changes in forest watercourses. They see effects of a changed climate, such as rising water temperatures, which contributes to our waters becoming browner. This in turn affects aquatic life. Watch the film Skogslandskapets vatten speglar klimatförändringen (in Swedish).

Helena Aronsson is a researcher at the Department of Soil and Environment. Helena shows us a research project that is about capturing the nutrients from outdoor chicken farms in a smart way. This reduces the risk of eutrophication in the water. Watch the film Östersjösmart hönshållning minskar övergödningen (in Swedish).

A film with Jennie Barron, professor of agricultural water management. Jennie presents herself and her research that will contribute to a more resilient water management in the farming landscape in Kenya, for example. If agriculture handles water more effectively and sustainably, more people can access clean water.

In the film Så minskar vi Östersjöns övergödning (in Swedish) Jens Fölster and Lars Sonesten talk about research and environmental assessment on how much nutrients are leaking into lakes and watercourses. What measures have been taken against nutrient leakage, and how can we catch the nutrients that still leak out?

Water and the city

The film Vad gömmer sig i ditt dricksvatten? (in Swedish) gives an introduction to how SLU works to secure our drinking water. SLU's water researchers produce knowledge for decision-makers and the water industry, supporting safer drinking water and water purification.

In the film Vilka metoder kan hjälpa oss att tidigt upptäcka föroreningar i dricksvattnet? (in Swedish), professor Karin Wiberg and her colleagues explain how they develop methods to be able to detect risks with pollutants in the water at an early stage before health effects occur.

A film with Björn Vinnerås, professor in environmental engineering (in Swedish). Björn talks about technical solutions for recycle plant nutrients from the city back to the agricultural fields - technology for rediverting plant nutrients away from sewage systems, to produce new fertilizers.

A film with Anders Glynn, professor in toxicology (in Swedish). Anders finds out if chemicals in food and drinking water can be a health risk for the population in Sweden.

The researchers behind the website urbanfishing.com have produced the video Urban fishing in Stockholm. Fishing in the city is common and it has been shown that people often eat the fish they catch there. Researchers are interested in this phenomenon.

Tomas Brodin is a professor at the Department of Wildlife, Fish and Environmental Studies. Tomas and his research group study how drug residues, that are released into the aquatic environment, affect fish behaviors. They have seen that fish become more courageous, more active and more antisocial when there are anti-anxiety drugs in the water. Watch the film Läkemedelsrester ändrar fiskars beteende (in Swedish).

The Swedish Environmental Protection Agency incorporates new knowledge into their environmental work. They have an environmental research fund for needs-driven research to support the authorities' management work. In the film Green infrastructure you get to know more about Crosslink, a research project on the value of woody “buffers” in the riparian zone, in which researcher Brendan McKie participates.

In a film with Stefan Bertilsson, professor in functional ecology of freshwaters, Stefan talks about his studies on microorganisms that break down dead organic material, convert metals into more toxic and volatile forms and fix nitrogen and break down or produce methane. He also studies the environmental factors that control these processes in lakes, running water, wetlands and groundwater.

A film with Anti Vasemägi, professor in fish genetics. Anti investigates genetic and phenotypic patterns in trout, Atlantic salmon and perch, and also parasites that attack different fish species. The goal is to find genes and genetic variants that affect how the fish adapts to nature and to changes caused by humans.

Meet our researcher Valerio Bartolino at the Department of Aquatic Resources. In the film Framtidens mat och framtidens klimat hör ihop he talks about the marine life that is affected and changed by, for example, large-scale fishing and climate change in a complex interplay. Are the fish we want to eat winners or losers in the changing world?

In the film How fish are affected by a warmer Baltic Sea, Magnus Huss and Anna Gårdmark, from the Department of Aquatic Resources talk about their studies on how fish and other organisms are affected by warmer seas and lakes.

In the film about the research vessel Svea (in Swedish) we visit one of the world's most modern ocean-going research vessels. R/V Svea, which is owned by SLU, can be used for virtually all types of marine research and environmental monitoring.

In the film Hur många fiskar finns under ytan? Provfiske ger svar (in Swedish) we go with Jens Olsson, Martina Blaas and Per Holliland at the Department of Aquatic Resources to catch fish in Galtfjärden, one of the Baltic Sea's coastal waters. As an example, the sampling of fish shows that perch has become more common in Galtfjärden as the water has become warmer.

Martina Blass is an environmental monitoring and assessment analyst at the Department of Aquatic Resources. In the film Hörselstenen berättar hur gammal fisken är (in Swedish), we learn how Martina and her colleaues determine the age of fish by looking at the fish's ear stones. Age analyzes help us to determine the fish life and how humans affect it.

Anna-Karin Dahlberg conduct research on environmental chemistry at the Department of Aquatic Sciences and Assessment. In the film Håller koll på miljögifter från fiberbankar (in Swedish) Anna-Karin talks about how she and her colleagues study the spread of environmental toxins from wood fibers that the paper and pulp industry has released in seas, lakes and rivers in Sweden. They also work with methods for cleaning the fiber banks.

In a research project on reeds, we investigate how and when reeds should be harvested to function as feed and how it can best be preserved by ensilage. We will also investigate whether the feed value can be improved through various physical and biological process methods. The overall purpose is to recover nutrients from land and water that would otherwise end up in the Baltic Sea. Watch a video about reed harvesting at Kyrkfjärden with a special hydrocopter.

An introductory video about the SLU Feed Technology Laboratory from the Department of Animal Nutrition and Management.

In the film Skörd av vass och odling av musslor – en miljöåtgärd för Östersjön (in Swedish), Anders Kiessling, professor in aquaculture, talks about his research group´s studies on how reeds and mussels can be used as animal feed.