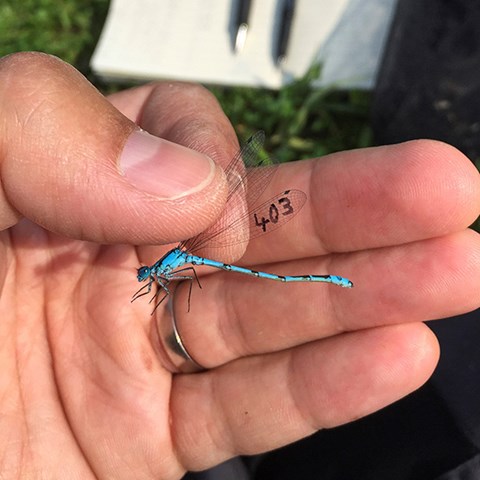 Marked damselflies from one of our studies. Photo: Kari Kaunisto.

Insects are many, important and diverse. Among other things, they recycle nutrients, disperse seeds, transmit disease, pollinate our crops – and eat part of them, too. They also provide food to many of the organisms which are not insects themselves. Insects have fascinated people throughout the ages, and affected the fate of civilizations.

Importantly, insect ecology is no separate scientific discipline: there is no way we can understand insects in isolation from the wider communities and ecosystem in which they are immersed. In reflectance of this, much of our work is aimed on understanding the role of insects in wider networks of ecological interactions. Having a separate unit for insect ecology is built on the simple idea that insects can help us approach many big and general questions in ecology.

The future of insects

During the last decade, some serious alarm calls have rung out: Insects may now be declining across the world. Yet, much remains to be learnt regarding what insects are really declining – and where and why. These are questions which we actively explore. At the same time, we explore new roles for insects: as food, as ingredients for augmented biocontrol, etc. To understand the future of insects on this planet, we really need to understand where they came from. How many insects species has evolution produced so far, and how may current species change through evolution? Local adaptation to current conditions appears widespread among insects – but if local conditions now change, then how rapidly may insects change, too? These are questions at the heart of our unit.

As a strong line of research, we focus on interdisciplinary approaches to understanding environmental change and human-nature relationships, as well as participatory approaches. What we try to do is to learn together from studying ongoing citizen science initiatives and developing new ones. To construct new insight, we try to bring together different forms of knowledge about the environment, held by specific actors in society (including scientists) and/or the wider society (which in part concerns insects). Involving such wider audiences and views will allow us to enrich and expand current science, we feel.

Through what we do, we want to help others understand the value and role of insects and biodiversity. With this in mind, we have helped create resources for schools, colleagues and the general public. To highlight the key role of trees as small worlds within the world, we have collaborated with Stockholm University to create web-based resources for schools. And to illustrate the wider value of biodiversity, and of biodiversity research, we have worked with our colleagues at the Research Centre for Ecological Change (REC) at the University of Helsinki to create an extensive video material and teaching package on biodiversity. To create identification resources, we work on collections of identified DNA-sequences (so-called reference libraries) at regional and national levels. Project LIFEPLAN is mostly about creating methods for the use of the wider community. Not to mentioned popular books on our study organisms, such as dung beetles.