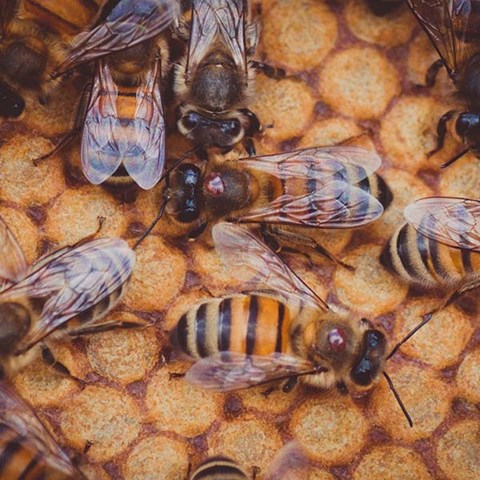 Bee with varroa-mite on its back. Photo: Barabara Locke Grandér

The ectoparasitic mite, Varroa destructor, is inarguably the most significant threat to honey bee health and the sustainability of beekeeping worldwide. The research on varroa mites in our group focuses on understanding the ecology, evolution and adaptations between the honeybees, the varroa mites and the viruses vectored by the mite.

Since the introduction and global spread of this parasite in the early 1980s, wild honey bee populations, particularly in Europe and North America, have been nearly completely eradicated. Honey bee colony survival has become reliant on mite population control treatments and practices applied through apiculture. Without mite control, a colony would likely collapse within a year or two. However, the varroa mite induced honeybee colony mortality is actually due to a virus infection vectored by the mite and develops into an epidemic when the mite population grows.

Despite the impact varroa mites have made on honeybees globally, there are a few unique well documented honey bee populations that have survived with high mite infestation for several years without mite control (Locke 2016). Our research group has made some of the most significant scientific discoveries on these mite-surviving honeybee populations including:

Our current research goal is to comprehensively describe the resistance and tolerance traits from these naturally adapted populations with the hope that it can provide insight for improvements in resistance breeding efforts in apiculture.

How does apiculture influence Varroa mite-virus disease ecology and coevolution?

This question has been a long-standing central theme in the research of our group. The host-parasite-pathogen relationship between the bee, the mite and the virus is naturally complex but also significantly impacted by management practices in apiculture. By understanding the significance of apiculture on this system we can identify better management strategies to improve honey bee health.