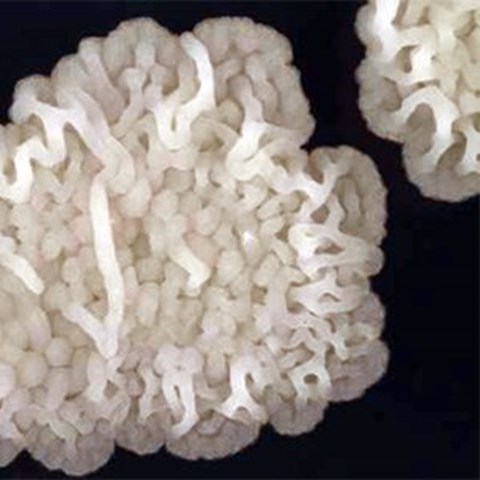 We are working with several different fungi in our research. Some of our projects are described below.

Oleaginous yeasts can convert carbohydrates into fatty acids at the highest known specific rates and the fatty acid content can exceed half of the total biomass in the cell. Carbohydrates derived from lignocellulose, are regarded as the main resource for a future fossil free renewable bio-based economy. This project investigates the conversion of those carbohydrates to biodiesel or lipids for fish feeding, using oleaginous yeasts such as Lipomyces starkeyi or Rhodotorula glutinis.

All living cells, whether prokaryotic or eukaryotic, need water for their metabolism. The most ‘dry-tolerant’ organisms known to date is the mould, Xeromyces bisporus. Spoilage of stored commodities by xerophilic (‘dry-loving’) filamentous fungi (moulds) causes significant losses to food, animal feed and substrates for biofuel production. We apply both physiological methods and genomics and transcriptomics to study the cellular mechanisms that permit these moulds to grow in dry conditions.

Baker's yeast, Saccharomyces cerevisiae, dominates industrial ethanol production due to its tolerance against high ethanol concentrations and other stresses. We have, however, discovered that in certain industrial environments another yeast, Dekkera bruxellensis, can outcompete S. cerevisiae and be used as a production organism. We are investigating the physiology of yeast competitiveness in controlled bioreactor experiments, and by transcriptome sequencing. D. bruxellensis is also being tested for its ability to convert lignocellulose to ethanol.

Yeasts for Biopreservation and Pre-Treatment of Biomass

Biomass is frequently preserved by drying, which requires a lot of energy. We are investigating alternative methods, where feed grain or lignocellulose for biofuel production is stored moist in the presence of yeasts that inhibit spoilage organisms. We found that polysaccharides are more accessible for enzymatic degradation after moist storage. Yeasts like Scheffersomyces stipitis can de-stabilize lignocellulose, which reduces the need for pre-treatment. Since pre-treatment is a bottleneck in biofuel production, we are also working on a process based on integrated storage and pre-treatment (ISP).

Exploring the Ins and Outs of Yeast Metabolism

Yeasts, like other fungi, are crafty critters able to assimilate a vast array of different compounds but also produce many compounds of economical interest. Yet despite the 350 or so sequenced yeast genomes, we still have a very poor understanding of the genes that allow yeasts to metabolize a certain compound and produce another. This project aims at identifying genes involved in the assimilation of "unorthodox" sources of carbon, nitrogen and sulfur, knowledge that can be used to engineer yeast strains for growth on cheap and renewable substrates and for degradation of harmful chemicals (bioremediation).