Secondary metabolites are compounds that many organisms produce and use for interactions with other organisms, for examples substances produced by plants to deter herbivores or volatile substances used by insects for communication. 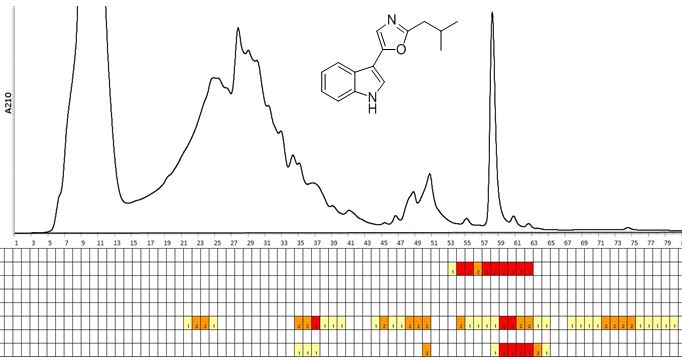 The aim of this on-going project is to find new antibiotic secondary metbolites in cultures of fungi and bacteria, for possible further development into novel antibiotic drugs. The background to the project is the drastic increase in antibiotic resistant pathogenic bacteria that are spreading on a global scale. New antibiotic drugs are urgently needed. The result of the project is so far the isolation and characterization of a large number of new antibacterial secondary metablites described in several manuscripts, of which a few were recently published (Broberg et a (2017), Bjerketorp et al (2017), Nord et al (2019), Levenfors et al (2020), Nord et al (2020a), Nord et al (2020b)), as well as method oriented papers (Broberg et al (2021), Bjerketorp et al (2021). Nine patent applications concerning new methods to treat bacterial infections have been granted.

The phytotoxic substance fomannoxin has been known for 50 years, and it has been assumed to be important to how root-rotting fungi infect coniferous treet. In this project, the biosynthesis of this metabolite was determined by feeding cultures with isotope labelled glucose in combination with NMR and mass spectrometry. The study was published in Phytochemistry, 2012, 84, 31–39. 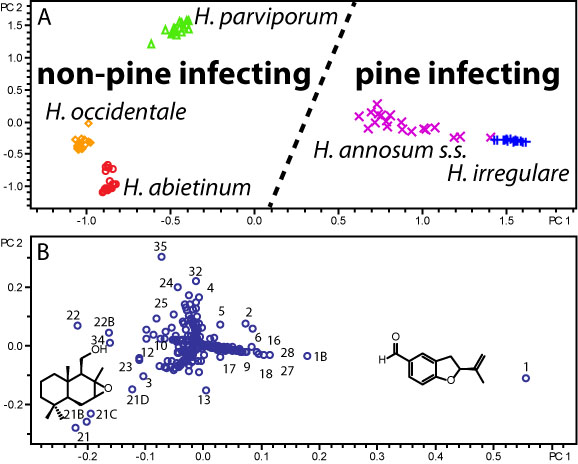 The different fungal species within the species complex have slightly differing host preferences. We investigated by HPLC-MS and statistical methods if it was possible to link the host preference with the production of secondary metabolites by the fungi. Only the pine-infecting species were found to produce the phytotoxic substance fomannoxin, indicating that this substance is needed for infection of pine. The study was published in Phytochemistry, 2014, 108, 243–251. 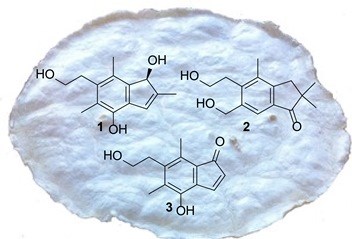 The fungus Granulobasidium vellereum grows predominantly on dead wood, and it is very successful in competing with other organisms for nutrients and space on these substrates. One hypothesis to explain this success is that the fungus produce secondary metabolites to fight off competing organisms. We found that the fungus produced more than 20 previously unknown compounds of sesquiterpene type and many of these were highly cytotoxic. These studies were published in Molecules 2014, 19(9), 14195-14203, Phytochemistry, 2013, 90, 128–134,  Phytochemistry, 2014, 102, 197–204, and Journal of natural products, 2015, 78, 2559-2564.