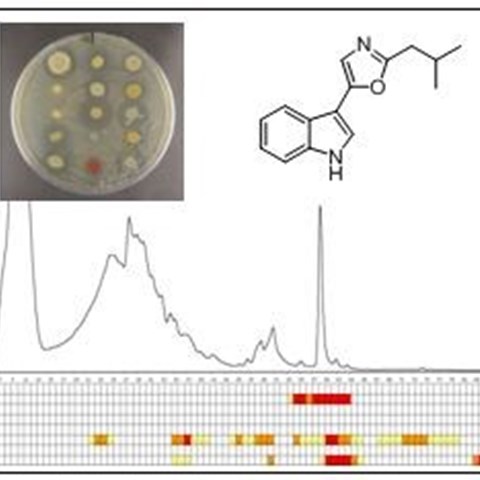 Antibiotic resistant bacteria have become a major threat to human health. New and effective antibiotic drugs are urgently needed. The main goal of this research project is to find novel secondary metabolites in bacteria and fungi that can be developed into new antibiotic drugs.

Antibiotic resistant bacteria have become a major threat to global health, as recognized by e.g. WHO. The number of available new antibiotic drugs is drastically decreasing and the lack of effective antibiotics already reduces the chances to cure life-threatening infections in humans. In a near future, the problem is expected to escalate.

Many microorganisms produce so called secondary metabolites, that they may use to fight off competing organisms, e.g. other bacteria or fungi, and such compounds can be developed for utilization as antibiotic drugs. Since the development of the first antibiotics in the 1940’s, microorganisms have been the source for the vast majority of all antibiotics used. The last few decades, however, the major pharmaceutical companies have abandoned screening bacteria and fungi for new antibiotic compounds, mainly due to the increasing difficulties to find new promising antibiotics using the existing techniques. Instead, chemical synthesis has been attempted to develop new antibiotics, but this has not been as successful as anticipated.

Additionally, the methods for isolation and characterization of secondary metabolites have improved substantially over the last couple of decades. The development of these novel and improved methods, has now again made Nature interesting as a source for new antibiotics.

The main goal of the project is to find new antibiotic secondary metabolites from microorganisms for development into new antibiotic drugs. Briefly, bacteria and fungi are isolated from many different sources and cultivated in a variety of media. The production of antibiotic compounds of the microorganisms is studied using bioassays against pathogenic bacteria in combination with techniques such as preparative HPLC, UHPLC-MS and NMR. This research has been on-going at SLU, Uppsala, since 2012. At present, the funding is from Ultupharma AB, and previous funding has been from Medivir AB and BioBo AB. The project has so far resulted in the isolation and characterization of a large number of new antibacterial compounds, of which a few are interesting candidates for development into antibiotic drugs. Nine patent applications have been submitted and granted and several scientific papers describing new antibiotic compounds or new methods have been published [Broberg et al (2017), Bjerketorp et al (2017), Nord et al (2019), Levenfors et al (2020), Nord et al (2020), Nord et al (2020), Broberg et al (2021), Bjerketorp et al (2021)].