Our research considers sustainable horticultural production in a broad perspective, i.e healthy horticultural plants, good agricultural and manufacturing practices, safe  and health-promoting products and a healthy environment. It is based on a system approach. Microorganisms are inevitable and necessary for healthy plants but can also be detrimental to both plant and humans. We investigate the use microorganisms to prevent plant disease attack (biocontrol) and how the natural plant associated microbiota can assist (habitat management) in disease control and in achieving increased yields  and plant products of high quality in both field and greenhouse horticulture . Incidents with human pathogens on plants have increasingly been reported. We identify critical points for human pathogen transmission (shigatoxin producing E. coli and others) and emerging hazards (antibiotic resistance genes, nanoparticles) during primary production and develop measures to counteract their transmission.

Microbial horticulture activities consider horticultural indoor and outdoor production of well-established crops, such as vegetables, fruit and berries, ornamentals, and of novel crops in both rural and urban areas (urban horticulture). Our research considers both low tech and highly engineered production systems (e.g. hydroponics, aquaponics). We are involved in the development and optimization of novel sustainable production systems considering resource-efficiency, particularly of water, plant nutrients, growing media and energy, as well as efficient use of space.

Our research addresses grand global challenges, i.e. food security and safety as well as biosecurity and biosafety, sustainability, water scarcity, land use as well as urbanization in a horticultural perspective.

Integrated production in greenhouses is usually performed in hydroponic production systems. These may be designed as open or closed systems. Open systems have a considerable impact on the environment surrounding the greenhouse as the drain solution rich in fertilizer and loaded with pesticides may be released. In contrast, closed hydroponic cropping systems where the nutrient rich water is circulated and reused display environmentally and economically sound solutions.

Extension service and scientists recommend the latter one. Closed growing systems are often called cropping systems with recirculating nutrient solution. After passage of the nutrient solution (water + solved fertilizers) through the crop, the solution is recollected, replenished with nutrients and water with respect to the depletion, pH is adjusted before redistributed to the crop.

Reuse of nutrient solution in closed systems is a well established technique within greenhouse horticulture. The technology is not new, but Swedish horticulture has been reluctant to acknowledge its environmental and financial pay-offs. Three reasons are often named in this context:

There are solutions to all these fears!

Technology for disinfestation of nutrient solution in closed systems exists. There are several alternatives to choose from. Choice of equipment depends on a number of factors, such as

Disinfestation takes place in one specific spot in the cropping system. Thus, the disinfesting equipment assists the removal of root pathogens for which the equipment is designed for. However, it does not affect spreading between plants. In general, disinfestation equipment may be grouped with respect to their effect on the microflora (incl. plant pathogens) in active (that kill the target organism) and passive (that remove the target organism) approaches. Biocontrol may prevent dispersal of root pathogens between plants.

Risk for accumulation of organic compounds in the recirculated nutrient solution

Organic compounds or organic matter per se may not adventure plant growth. In contrast they are an integral part of soil health. However, early failure of closed systems in the late 1980ies and early 1990ies lead to the assumption that phenolic compounds might accumulate in recirculating nutrient solution and thus cause phytotoxic response. Before this hypothesis could be proven scientifically, this theory was disseminated as a fact and everyone sang the gospel! However, our research shows that phenolic compounds

The tricky thing is to maintain an appropriate oxygen level in the nutrient solution!

During 2005 and 2006, we demonstrated the safe use of closed growing systems at three commercial sites in Scania. We currently develop devices for foreseeing the eventual dysfunctioning of slow filters integrated to closed growing systems and the health status in closed hydroponic greenhouse systems. In order to encourage the use in commercial greenhouse horticulture, we develop a closed system tool kit, information material to be used by extension officers in individual growers’ consultation.

We assist companies in testing and optimizing disinfestation devices according to our standard test.

Aquaculture is an important and favorable economic alternative to the conventional fishing strategies, especially in the light of decreasing natural fish stocks. However, this form of production also has a considerable impact on the environment due to release of large quantities of organic compounds to the aquatic environment. This may be counteracted through integration of aquaculture with hydroponic systems for high value crop production (aquaponics) where nutrient rich water is recirculated between fish tanks and the food crops’ root environment.

Aquaponic systems are predominantly adjusted for the needs of the fish, which leads to inferior plant quality. Within the framework of this project we use the experience we gathered during more than 20 years to optimize the crop oriented part in aquaponic systems. Our focus considers 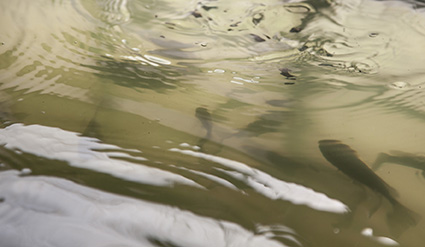 Horticulture focuses on the plant and optimizes its environment in order to produce high quality products. For production of high quality of vegetables, fruit and berries as well as ornamentals and transplants, greenhouse horticulture depends on soilless systems and the use of growing media.

Growing media may be of organic (e.g. peat, wood fibre, coir) or inorganic (e.g. mineral wool, pumice) origin. They are commonly assessed with respect to their physical and chemical properties. Standards for biological assessment of these media are still poor. A more thorough biological characterization of growing media is required due to (i) reuse of growing media as a result of reduced external input into horticultural cropping systems and (ii) plant health aspects connected to growing media in different stages of use.

Our activities focus on the microbial optimization of growing media, in particular with respect to root disease suppressiveness. This work constitutes the basis for development of GenIII-growing media, inhabiting a biological function.

We have shown that water content in the growing media and electrical conductivity in the nutrient solution were shown to be effective factors to enhance the biocontrol effect of the commercial product Binab T with Trichoderma species as active strains. The biocontrol effect of Binab T, indicated through the production of extracellular enzymes and the reduction of the amount of pathogen in the cultivation system, enhanced at electrical conductivity levels between 2.5-5.0 mS cm-1 in the nutrient and water content level in the growing media of 50% and 70%.

Consumer demand of organically grown fruit and vegetables is increasing. Internationally, organic horticulture has doubled from 2003 to 2013 in response to increasing demand for organic fruits and vegetables. Environmental benefits of organic farming are well documented. One major limitation for the expansion of organic horticulture is related to limited effective tools and strategies for pest and disease management. There are an increasing number of biocontrol agents to fight pests and diseases, but they are not always consistent in crop protection in field or greenhouse production. Beyond the fact that the health benefits of organic foods are controversial, organic fruits and vegetables have lower nitrate content and pesticide residues. However, few studies have dealt with strategies that promote or impair microbiological food safety. This is the case despite the proximity of edible plants with animal manure together with limited tools for organic farming to prevent microbial pre- and post-harvest proliferation.

In our research we are focusing on three different models

Greenhouse horticulture in the Northern circumpolar hemisphere(> 60°) is dependent of heating and supplemental assimilation lighting during autumn, winter and early spring which has an impact on the industry’s CO2-footprint. New strategies to reduce the CO2 -footprint of greenhouse horticulture have to be developed. Recently alternative raw material than fossil fuels have been introduced as heating material. Also, light emitting diodes (LEDs) are tested as alternatives to conventional lamps, such as high pressure sodium lamps.

Changes in the environmental conditions in the greenhouse may affect the structure of the microbial community composition. In turn the survival and establishment of pathogens and biocontrol agents might be disrupted.

Within the framework of this theme, we are studying the impact of energy-reducing measures on the microbial biogeography of greenhouse grown crops. Our main focus considers the interaction between alternative light sources and the microbiota associated to ornamental plants, biocontrol agents and fungal leaf pathogens.

Eutrophication of surface and ground water, water courses and impoundments as well as coastal areas is a considerable environmental problem leading to algal bloom and anoxic aquatic environments. The unique environment in the Baltic Sea is endangered. This negative trend is assisted by nitrogen and phosphate release.

Several factors contribute to accumulation of nitrogen and phosphate to water courses in the Baltic Sea catchment. Phosphoric detergents, lacking sewage system and sewage treatment are some of them. But also leakage of nitrogenic and phosphoric fertilizers are part of the problem.

This puts particular responsibility on horticultural production systems, both in field and in greenhouses. Intensive horticulture production in Sweden is mainly situated in the most vulnerable areas for eutrophication. Approaches to prevent nutrient leakage vary in response to the production site (outdoor and indoor horticulture). One general feature, however, is to adjust amendment of fertilizers and nutrient availability to the demands of the crops.

In our research we primarily work with prevention of nutrient release from greenhouse horticulture (closed cropping systems hydroponics and aquaponics).