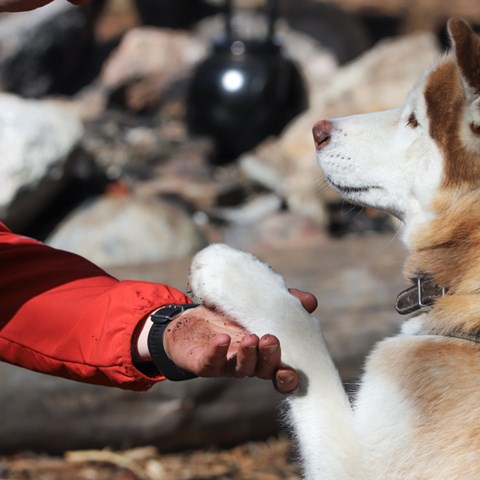 Modern research has been working for over forty years to find the answers. Several different hypotheses and theories have been formulated during this time*. We examine some of them below. The researchers – who come from areas of science such as environmental psychology, landscape architecture, forestry, medicine and others – base their formulations on their respective areas of expertise. They look from various angles at nature's importance to human health and find various explanations as to why humans respond positively to peaceful stays in nature. Some take as their basis our origin as a species or the significance of the individual location, others examine how we are impacted by different kinds of nature or by our sensory impressions.

It may seem a little disjointed and difficult to understand. Who is really right? There are probably several different factors determining why we react as we do to nature stays. The theories are not intended to be antithetical. Instead, they should be seen as interesting input that drives the research forward and brings us step by step closer to some kind of truth.

After all, there is consensus on the underlying reason why we feel good in nature: It is about our biological origin. The human species –Homo sapiens– has lived in nature for several hundred thousand years. Of all the species, we were, and are, one which sometimes has become hyper-stressed and panicked outside, and at other times has been restored and flourished in places in nature where we felt safe.

The human body (including the brain) has not changed much since then. However, it is changed in that more than half of the world's population today lives in cities, hangs out in bars, sits at computers, shops and lives in high-rise buildings. We are made for life in greenery and by water – it’s in our genes and our heritage of an estimated ten thousand generations of people living outdoors. Something within us recognises and likes the sensory input, the smells and sounds of safe places in nature. This is what triggers the body's parasympathetic system.

Deep down, most people – even people who consider themselves very urban – probably recognise this. One thing that suggests this is the explosion of visitors to nature reserves and national parks during the pandemic, when urban dwellers in particular visited in huge numbers. Research surveys and interviews reveal there are also plenty of people with severe illnesses and life crises who have testified to the power of nature and garden stays when they are feeling mentally fragile.

The short answer to the question 'why is the body's calm system triggered in nature?' is therefore: Because in nature, we feel at home. Anyone wanting a more detailed answer can delve deeper into the selection of the researchers’ explanatory models presented below.

* A hypothesis is an assumption of how something works in reality that has not yet been scientifically confirmed. When the hypothesis is considered confirmed, it becomes a theory.

This is a theory that deals with the physiological, involuntary reactions of the body. In short, when you are in a safe, aesthetically pleasing and beautiful place in nature, the parasympathetic system in your body is activated. We don’t think about it, it just happens, almost immediately. The body's fight, flight and stress systems are activated as soon as we see a snake, a precipice or anything else that frightens us.

It is as if the body has an unconscious alarm button and an automatic danger cut-off switch. The functions are there because they have helped us to survive over time and they still work, says environmental psychologist Roger Ulrich, whose pioneering research forms the basis of the theory.

This theory was developed from the research carried out by environmental psychologists Rachel and Stephen Kaplan and is based on the cognitive functions of the brain, namely its way of responding to the sensory pressures we encounter in the world around us.

When the Kaplans explain why we feel so well in nature, they distinguish between two different types of focus: directed and spontaneous attention (also called fascination). When directed attention is engaged, the brain goes into top gear, amongst other things, in order to disable and cut off the sensory input we don't need (for example in an urban environment or at work). It is stressful and tiring. When we are in a nature environment, spontaneous attention takes over. Even then, we are assailed by sensory input – like birdsong, forest scents, greenery etc. – but these are undemanding and do not tire out the brain, on the contrary, they have a restorative effect.

According to the Kaplans, a truly restorative nature environment should be one in which it is obvious that we are in a place different from the one in which we were tired. It should also arouse our curiosity, provide rich opportunities for fascination and offer opportunities for the type of activities we enjoy. In addition, the area should be cohesive and of a size that provides for different kinds of experiences.

Man has a innate ability to feel affection for all living things and to thrive in natural environments. That is why we seek out nature and react so positively there. This hypothesis can be traced back to ancient Greece but was launched in modern times by the American biologist (and entomologist) Edward O. Wilson. He called the ability to feel affection for nature and its inhabitants ‘biophilia’ and suggested it has benefited our survival throughout the ages.

People are particularly attracted to open landscapes close to water. This may be because this kind of environment has encouraged the survival of our species ever since our ancestors first trudged the savannah of the African continent. When you ask people around the world what kind of nature they prefer, they often describe an open landscape with individual trees and views of water. Archaeological excavations also show that this was precisely where our ancestors located their settlements.

The prospect and refuge theory

The most favourable environment for people early in our history was a protected site with a view over the immediate area. It was possible to watch out for approaching predators or hostile people and there was protection from the wind and weather. It was Jay Appleton, professor of geography, who developed the theory.

In this theory, the place where a person grew up takes center stage. An individual feels best in an environment he or she knows from childhood; in a landscape with familiar plants and animals. It can explain, for example, why some people feel at home by the sea and others in the forest or among asphalt and concrete. The theory was developed by Diane Relf, professor of horticulture.

Scope of meaning/scope of action

We respond in different ways to the sensory input of the surrounding environment depending on our mood and previous experiences. The theory suggests that a pond, a forest grove or a large stone can have different significance for a person depending on how he or she is feeling at the time.

This theory explains from a psycho-evolutionary perspective why nature-based rehabilitation can work. It has been developed by Patrik Grahn, professor of landscape architecture at SLU, who has been carrying out extensive research in relation to the rehabilitation garden in Alnarp.

Here Patrik Grahn goes further and shows that people who have become sick from stress have great need of a supportive environment. It can be about different environments and social activities depending on where you are in the recovery process. Grahn also emphasises that a professional team is an important part of the supportive environment. It is the team that ensures that the rehabilitation occurs at the right level.

Professor Patrik Grahn, who is the main source for the two theories above, has also developed a theory asserting which properties a nature area has to have in order to provide optimum relaxation. It is about accessibility, space, a certain size and wildness, but also about serenity, biodiversity, space for play and socialising, and a sense of historical anchoring.

It is also important to try to explain and substantiate how and why man is positively impacted by contact with animals. Researchers working in the fields of psychotherapy, health science, behavioural science, geriatrics and other disciplines, talk about the calming effects of animals, for example through touch. They may also have a role in motivating and supporting children, young people or adults in different ways. Contact with animals can give people a chance for meaningful activities and a sense of connection.

There have been some positive outcomes, but more experimental studies are needed, and after that more recapitulative statements and meta-analyses are required.

In their work, the researchers use different explanatory models. The theories deal with the human response to other individuals, but also to the surrounding nature.

Man has a innate ability to feel affection for all living things and to thrive in natural environments. That is why we seek out nature and react so positively there. This hypothesis can be traced back to ancient Greece but was launched in modern times by the American biologist (and entomologist) Edward O. Wilson. He called the ability to feel affection for nature and its inhabitants ‘biophilia’ and suggested it has benefited our survival throughout the ages.

Animals can provide social support for humans in a variety of ways. They are company, they respond in different ways, and offer emotional and physical closeness. When it comes to animals that live in social groups, such as dogs and humans, it is simply the case that the dog acts as part of the human pack, and vice versa: A person living in a single-person household can feel less alone if he or she has an affectionate indoor cat. Children can find comfort and support in the family's dog when the situation at home is messy.

Animals can also indirectly strengthen social ties between people. If you have a dog, you have to go out with it every day and often find it easy to come into contact with other dog owners or people who like dogs. The same applies to those who have a horse. It becomes a way to extend your pack.

Human beings need to connect with others for protection and survival. It starts as soon as we are born and follows us throughout our lives. The need is innate, according to the psychoanalyst and psychiatrist John Bowlby, who developed the theory.

For people who for various reasons have difficulty connecting and trusting other people, a pet can meet some of this need. According to the researchers, there are many similarities between the child-parent relationship and the human-dog relationship. A dog is dependent on his or her owner much as a child is on his or her parent. In addition, the relationship often means that you can both give and receive closeness and security. Therefore, according to the scientists, a dog or other pet can function well in a therapy situation or with a person who feels alone. (However, it is important to note that the animal is comfortable in the situation).

The relationship between a human being and an animal, however, is different from inter-human relationships. We do not share language, other than by movement and touch. The animals communicate their feelings via behaviour instead, something that can make them be perceived as more honest.

Bowlby, J. (1977) Making and breaking of affectional bonds. 1 Etiology and psychopathology in light of attachment theory. British journal of psychiatry 130:.201-210.