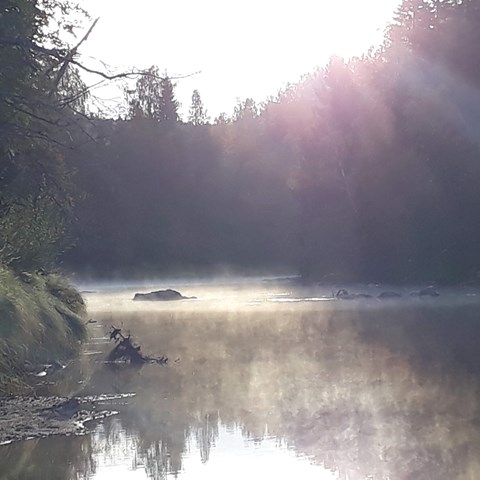 Humans have always known that nature and natural surroundings can provide relief and healing in different ways. Early in history, people began to experiment with herbal remedies and natural healers. Wise men, wise women and shamans performed rituals to protect against disease, often in specially selected spaces outdoors. The traditional folk medicine relied on a great deal of magical thinking.

The first man known to actively reject the old methods and the view of disease as the punishment of the gods or other supernatural beings was the Greek physician Hippocrates (460–370 BC). He ran a hospital with a garden on the island of Kos and often prescribed garden stays and walks in the forest to his patients to put them in the best possible condition for healing. He became very influential and is still, to this day, regarded as the father of medicine thanks to his revolutionary innovations in the field of medicine.

A few hundred years later, the Romans placed field hospitals in beautiful nature because they believed that the environment favoured healing, and in ancient Rome, gardens, pathways and tree plantations were laid out after citizens complained about the noise and congestion of the city.

During the Middle Ages, medicine and an interest in nature and gardens were primarily the preserve of monasteries in Europe. They often cultivated medicinal plants and vegetables while caring for the sick. Rest and work in the garden could be part of a monastery cure.

It would take until the 1600s before we started to talk about nature as a health benefit accessible to a wider population. At that time, parks were built in the major cities that flourished in the newly industrialised Europe. Citizens often lived in cramped conditions and worked in unhealthy environments in factories and were therefore considered to need the opportunity for recovery. In London, Hyde Park was opened to the wider public – it had previously only served as a hunting ground for rich people.

During this time, it was also popular to seek out scenic places outside the cities to breathe mountain or sea air, sit in the sun, walk in nature and ”take the waters” (drinking spring water was considered to have significant health benefits). Health resorts and spa baths were built in suitable places, but also sanatoriums (for tuberculosis patients) and psychiatric hospitals were placed in the middle of nature, often far from the cities.

The nature environments that were considered to have healing properties at this time were almost always created or cultivated by man. The rest of the surroundings, the wild nature, was often considered dangerous and unpleasant. This attitude was common until the period known as the Romantic period – from the end of the 1700s to the middle of the 1800s. At that time, the French philosopher Jean-Jaques Rousseau (1712–78) appeared, whose thoughts on, for example, child education, pedagogy and the human relationship with nature (also from a religious and existential perspective) are still relevant today. According to Rousseau, a person who wanted to get to know himself could advantageously do so in conjunction with the natural surroundings. He said that anyone who experienced the outdoors with an open mind was one with nature and felt its harmony within him. (It sounds almost like something a therapist using nature as a working environment would say today.)

Another well-known thinker on the subject was the North American writer and philosopher Henry David Thoreau (1817–62). He saw nature as a self-contained whole that included man, arguing that people simply fell ill if they were to move away from it. 'Nature is just another word for health', is a famous Thoreau quote.

In the late 1800s, medical science developed as a result of the increased knowledge of human physiology and the origin of diseases. Nature was then seen less and less as a resource for human health and was replaced entirely by an increasingly efficient healthcare system with new medicines and treatments, X-ray machines and more, in sterile indoor environments.

Herbal medicine, drinking from wells, spa baths and outdoor stays were out of fashion. But when modern medicine did not seem to help, for example in psychiatry or in the rehabilitation of shell-shocked soldiers in the US and Great Britain after the World Wars, animal and garden care was used successfully.

It was also in the United States that modern research into the significance of nature to health began to burgeon in the 1960-century. It was then mainly about outdoor activities and wilderness recreation. The major breakthrough came in early 1980 when environmental psychologist Roger Ulrich published several studies. In his most famous study, he was able to demonstrate that newly operated patients who had a view from the hospital room toward green spaces recovered more quickly and generally felt better than those who had a view of a brick wall. After this, nature-based health research started to be more broadly accepted.

Domestic animals – especially dogs and horses – have been used for hundreds of years as a therapeutic support for people with mental illness and chronic diseases. They were considered to be able to relieve loneliness and boredom, but it was also thought that they could accelerate healing. The famous nurse Florence Nightingale reportedly used animals in the care of the mentally ill in the 1860s, and dogs were included in the care of the wounded in the United States after World War II. Horse riding as a rehabilitation for people with disabilities has been practiced in Sweden since the 1950s.

Modern research into the importance of animals to human health was initiated by the psychotherapist Boris Levinson in the early 1960s. He discovered that it was helpful for his dog to be in the room when he was working with autistic children. The children were more relaxed in their relationship with him as well. Levinson published research studies and several books on the subject and gained many followers.