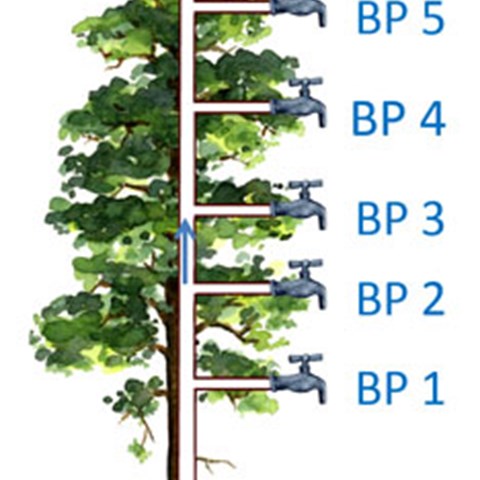 In the fall of 2015, the Knut and Alice Wallenberg foundation granted 39 million SEK during five years to a research group at SLU in Umeå, in collaboration with researchers at Umeå and Helsinki University, to study the physiological and environmental drivers of carbon and water fluxes in forest ecosystems. This project is divided into five interrelated Branch-Points (BP) that spans the scale from leaf-level physiology to forest stand-level to better understand mechanisms influencing biomass production in boreal forests. Here, at this page, the project is described in more detail.

Water and carbon are routed down specific flowpaths when they move through ecosystems, controlling the production of biomass and streamflow. The routing depends on branch points, where the water or carbon must go to one side or another. We often discuss these branched flows in terms of efficiencies, where the flow down some productive branch is related to the flow arriving at that branch. Stable isotopes provide a powerful tool for describing these branchpoints because the isotopes often prefer one branch over the other, providing a continuous measure based on the natural abundance. Recent advances in theory and instrumentation have made it possible to use stable isotopes to describe several key branchpoints, described in detail below.

This project focuses on several key branchpoints where isotopic differences are likely. The branchpoint analysis will be synthesized into a network using simulation models, which will provide estimates of the major products of ecosystem flows: streamflow, biomass production, and soil organic matter.

In summary the project aims to 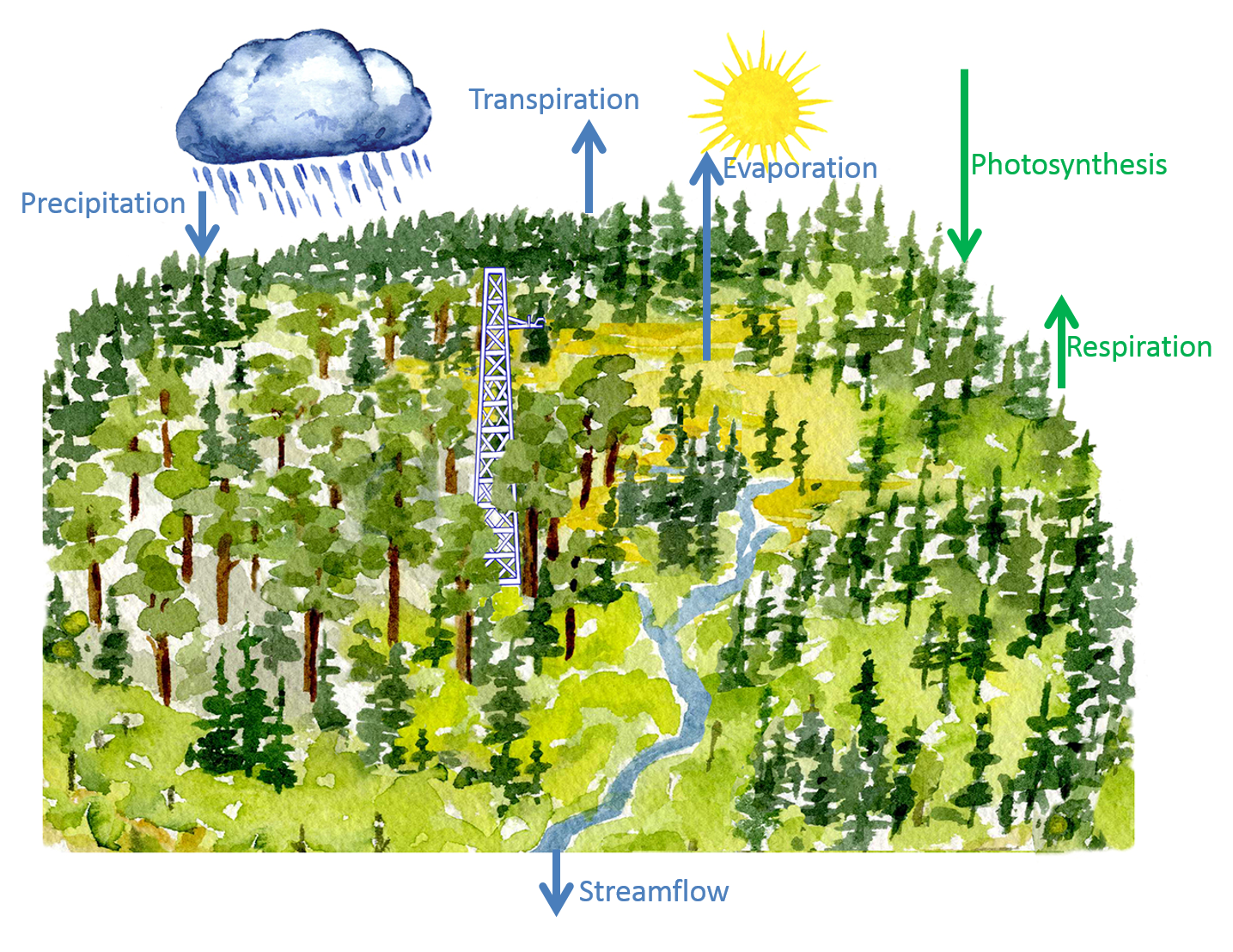 Why is this project important?

Although we have collected a lot of descriptive data about forests and watersheds over the past 150 years, we have little understanding of how forests and watersheds actually work. For example, it is clear that the carbon and water cycles are connected, but it is not clear how. These new isotopic branchpoint analyses will provide an important piece of that understanding. This will help us to predict the long-term consequences of climate change and management change in forests, where the long-term is where sustainability of forest practices will, or will not, be measured.

Precipitation is delivered to the ecosystem and thence partitioned between evapotranspiration and streamflow. Generally, we expect evapotranspiration to prefer the lighter isotopes of hydrogen and oxygen, leaving more of the heavy isotopes in the streamflow from the system. We have long-term samples of precipitation and streamflow, which are being analyzed under this study. The availability of independent estimates of streamflow and precipitation rates provide a means of calibrating an isotopic model, which can be used elsewhere, where flow rates have not been measured.

The evapotranspiration flow described above can be further partitioned into evaporation from soil and leaf surfaces and transpiration from inside leaves. This distinction is important because transpiration supports photosynthesis, which is the basis of biomass production. Surface evaporation begins with a preference for the lighter isotopes, but ends with heavier isotopes as the last of the water evaporates. Transpiration should not show an isotopic preference. This difference in behavior is expected to correlate with the isotopic composition of evaporative water flows.

Carbon isotope ratios have long been considered a measure of water-use efficiency (WUE), the ratio of photosynthesis to transpiration. If we can estimate transpiration as described in branchpoint 2 above, then we could estimate photosynthesis. However, the use of this technique has been limited because carbon isotopes do not provide an exact estimate of WUE. We intend to measure mesophyll conductance, which provides an empirical means of correcting the isotopic estimates to true water-use efficiency. Beyond that, mesophyll conductance is critically important to understanding photosynthesis, meaning that it provides mechanistic understanding as well as an empirical adjustment for WUE.

Although some models of photosynthesis are based on transpiration, as described in branchpoint 3 above, others are based on light absorption. A key parameter in the conversion of light to photosynthesis is the partitioning between carboxylations and oxygenations, or photorespiration. An method for describing this branchpoint has recently been developed and tested, potentially allowing reconstruction of past light-use efficiency from tree rings. We will test whether we can detect climate-change effects on this important branchpoint.

Plant physiologists have long recognized that an inefficient respiratory pathway is present in many plants, which produces more heat and less biomass than the usual one. To the extent that the alternative pathway is active, there will be a reduction in the efficiency of the conversion of photosynthate into biomass. An isotopic method has recently been developed for measuring the branchpoint between these two pathways. We will use this method to assess the variation in respiratory efficiency in boreal forests.

Once photosynthesis is done, the aboveground growth rates of trees depend very much on how the photosynthate is partitioned. There is a long history of describing root/shoot biomass ratios of potted individual plants, but it is more difficult to describe the flows aboveground and belowground, especially for a whole forest. We intend to address this issue using the Total Belowground Carbon Flux (TBCF) approach, which essentially solves for belowground partitioning based on a soil carbon budget. As powerful as this approach is, it becomes still more rigorous when checked by isotopic carbon budget, which provides a further test of the inferred partitioning estimates. The aboveground carbon flux into biomass will also be estimated using standard carbon budgeting techniques and confirmed by an isotopic mass balance. 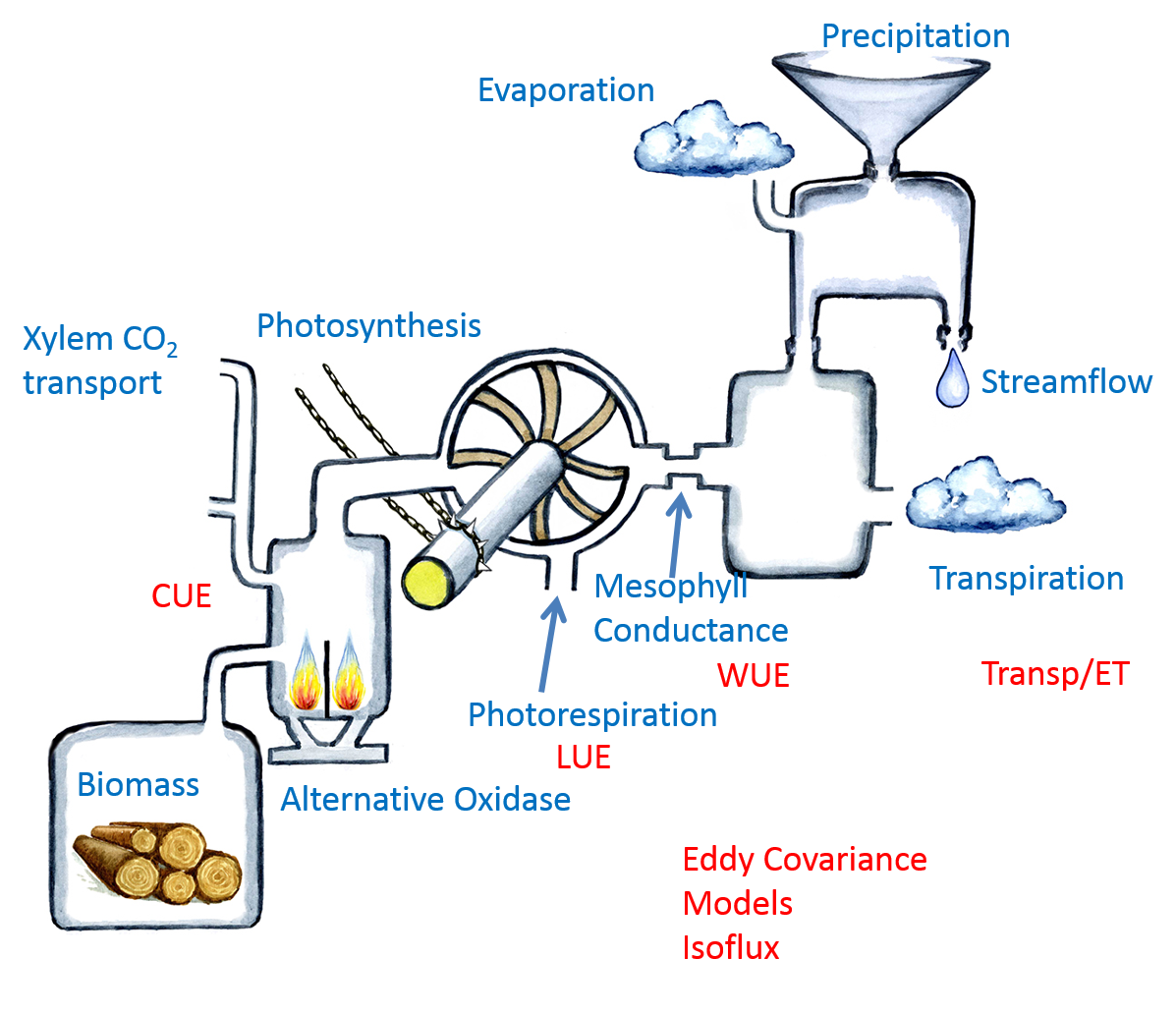 Once photosynthate has been partitioned belowground or dropped as leaf litter, it may either accumulate as soil organic matter (SOM) or be oxidized to CO2. This branchpoint determines the size of the soil CO2 flux and the rate of sequestration of carbon belowground. It is clear that nitrogen addition leads to rapid accumulation of SOM, but the mechanism is unclear. We will combine transcriptomic and proteomic approaches to determine how microbial metabolism is shifted under nitrogen addition. This section will also provide a rigorous assessment of the carbon accumulation rates in nitrogen addition studies around Rosinedal and Svartberget,

System-level fluxes can be measured using atmospheric measurements to describe the transfer of CO2 and water vapor through a plane above the canopy. These analyses, referred to as eddy flux, describe the accumulation of everything below the plane integrated over some footprint. Our group has pioneered methods of dealing with this question of representation and we will build on them in the current study.

Synthesis 2) Models of carbon and water branchpoints in boreal forests

Computer models provide a particularly powerful synthesis in they are built from explicit descriptions of the carbon and water budgets. These budgets include some of the branchpoints we are studying here, but can easily be modified to include all of them. Once we have modified the model, we can parameterize it with isotopic data and test its predictions against empirical data measured in the other parts of this overall project.

Recent developments in instrumentation and theory have made it possible to measure and interpret isotopic composition of the CO2 eddies using eddy flux techniques. This “isoflux” data provides an independent test of the carbon budget parameters measured elsewhere in this project, but it also provides an opportunity to infer the two main components within the net flux: photosynthesis and respiration. These inferences can be used to test those coming from the standard eddy flux method and will help us to understand where changes in the ecosystem carbon budget are coming from, improving our ability to predict and explain those changes.

The project includes scientists from SLU, the University of Umeå, and the University of Helsinki. The group was chosen for ability to bring a specific expertise to the project, usually focused on some new isotopic tool for describing a key branchpoint, but also for synthetic platforms that will allow the group to integrate their branchpoint studies into a quantitative description of the whole ecosystem.

At this point, all positions have been filled. However, a new round of postdocs may be sought in the fall, focused on gaps and opportunities that have arisen since the project began.

2017 - Workshop in Finland, visit at Hyytiälä (unsure of the spelling) field station, isotope workshop in Umeå.

The isotopic studies will be conducted partly with field instruments at the study sites, partly at the SLU Stable Isotope Lab, and partly at the NMR facility at Umeå University

Read more about Branchpoint in these articles: