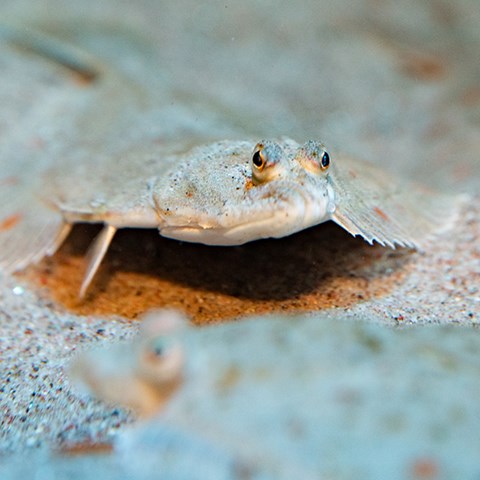 Biological diversity is not only a matter of species diversity. Genetic diversity within species is equally important. Genetic patterns can be analyzed and described using modern DNA techniques, and used to identify fish stocks, estimate migration between areas, and study local adaptations.

We use genetics to map the distribution of the two species of flounder, European (Platichtys flesus) and Baltic flounder (Platichtys solemdali) that occur in the Baltic Sea. These species have different spawning patterns, but share feeding areas. They are difficult to separate by bare eye, which complicates management. By using genetic markers we can estimate where in the Baltic Sea the two species occur.

Together with Stockholm University, we map spawning populations of herring (Clupea harengus) along the Swedish coast. By using newly developed genetic markers we will be able to identify stocks that earlier have not been possible to separate. This is valuable information for the stock assessments that is conducted for herring and other species. We conduct similar studies.

We study the degree of isolation among spawning populations of pike within the project ReFisk that was coordinated by county administrative boards until 2020. Genetic differences among pike populations along the coast is rather large and increase with geographic distance. Some pike populations show a higher degree of isolation, for example populations in the outer archipelago and populations that migrate up freshwater streams for spawning. This new knowledge about genetic patterns contributed to the Swedish Agenc for Marine and Water Management introducing stronger protection for pike along the Swedish east coast.

How does fisheries affect the genes?

We also study effects of different levels of fishing pressure. Perch in protected areas have been shown to grow considerably faster than perch in areas where fishing is permitted. We study whether the differences imply that perch populations have adapted genetically to different fishing pressures.

Together with the county administrative board in Västernorrland we are planning to map river lamprey (Lampetra fluviatilis) genetically. This work is part of the action plan for the species, which was initiated by SWAM 2021-2025. Today we know very little about the degree of isolation of different populations of river lamprey. By studying the genetics, we can contribute important information to the action plan