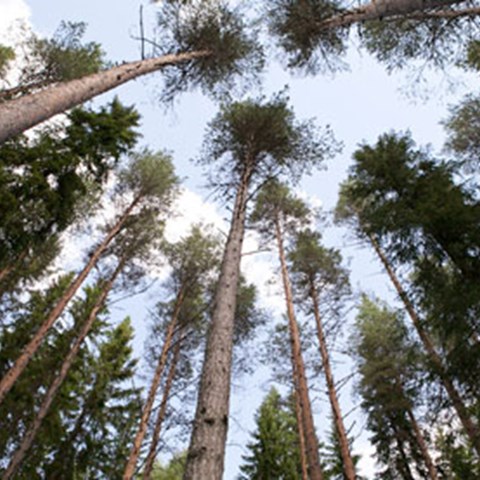 The research sites of Svartberget are found at several places within Vindeln and Gällivare municipalities in Norrbotten County. Our experimental forests are important research infrastructures for researchers from the Swedish University of Agricultural Sciences (SLU) as well as for researchers who come from other universities in Sweden or abroad.

Svartberget Experimental Forest was established in 1923 and covers more than 1 000 hectares. It is located seven kilometers northwest of Vindeln community. The major habitat is defined by elevation ranges from 160 to 320 meters above sea level and a mixed conifer forest. The bedrock is composed almost entirely of gneiss, and the soil is dominated by moraines of various thicknesses.

In the southeast, there is a large flat area called Åheden which is situated 175 meters above sea level and consists of sediments of sand and fine silt.

Kulbäcksliden Experimental Forest was established in 1923 and covers 1 500 hectares. The experimental forest is situated where the Vindel River and the Ume River begin to part, eleven kilometers west-southwest of Vindeln. The elevation there ranges from 160 to 320 meters above sea level and the forest is completely dominated by Scots pine and Norway spruce.

From 1927-1958, Professor Lars Tirén was the scientific director of the experimental forests. His interest in questions about forest regeneration led him to start up a large number of regeneration experiments at Kulbäcksliden, many of which remain today.

He also thoroughly described Kulbäcksliden from a historical perspective and, in 1937, published the academic work: Skogshistoriska studier i trakten av Degerfors i Västerbotten.

Ätnarova Experimental Forest was established in 1961. It covers 3 500 hectares and is situated 23 kilometers southwest of Gällivare municipally. To the southwest, the experimental forest borders Muddus National Park. The research site is quite high, located at an elevation of between 430 and 540 meters above sea level.  The dominate forest types are old, sparsely distributed pine forest, “Norrland fir”, or birch stump shoots from cuttings made in the 40s.

A small house was built at Kulbäcksliden in the year 1923. The cottage served as accomodation and as a laboratory when scientists came to do research in the experimental forests. There was also a cook who took care of them. Nowadays, the house is not in use, but the surroundings is a nice stop for lunch break at forest excursions.

In Kulbäcksliden there is a 2.2 kilometer nature trail, "Kungaspåret", along which there are marked stations with information boards. At his/her own pace, visitors can learn about the history of the  forest and the region, forest fires, animals and nature, potash production, charcoal burning, tar kilns producing tar from wood,  and forest research. The trail is well suited to school groups. The start is at Flakastugan.

On Kulbäcksliden there are areas with forests exposed to prescribed burning after felling in the 40s.