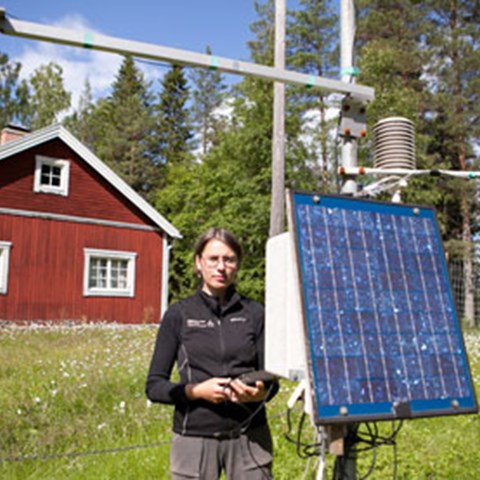 The staff carries out long-term measurements of climate, soil conditions, ozone, precipitation chemistry, and runoff chemistry in order to provide projects performed in the experimental plots with background data about the condition of the air, land, and water.

The Vindeln region has a cold, temperate, humid climate, characterized by long winters with permanent snow cover from mid-November to late April. Despite its northern location, the summer period is relatively warm with long days and short nights. The growing season starts in early May and ends in late September/early October. Annual precipitation is 614 mm, of which about half falls during the growing season. The average annual temperature is + 1.8 °C, but the variation during the year is large, with an average temperature of - 9.5 °C in January and +14.7 °C in July.

Compilations of the most used climate variables are published in an annual report: Referensmätning av klimat vid skogliga försöksparkerna.

The Swedish Environmental Research Institute (IVL) has been measuring the ozone in the troposphere daily since 1985 in order to inform the public about occurrences of high concentrations. There are ozone stations at nine locations in Sweden, including one in Vindeln. A diagram of ozone levels can be found on IVL's website.

Visit a list with all measured climate variables (in Swedish)

Ozone in the stratosphere - data from Vindeln