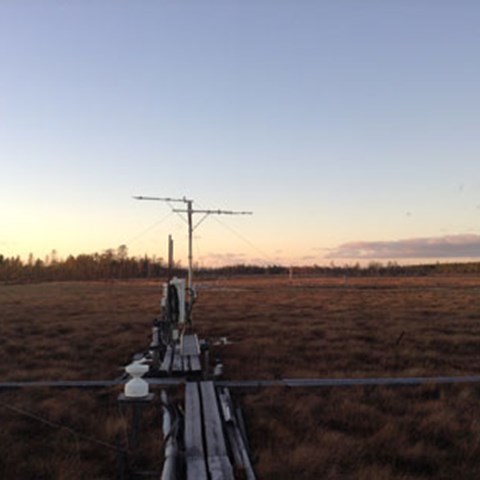 Degerös ecosystem station provides continuous data on greenhouse gas concentrations in the atmosphere and fluxes between the atmosphere and the mire. The station measures the conditions in boreal mires and is a part of a network of stations within Integrated Carbon Observation System (ICOS), a European research infrastructure that quantifies and seeks to understand the greenhouse gas balance of the European continent and of adjacent regions.

The location of the station was strategically chosen based on research that has been performed at Degerö mire for more than 100 years. In the central parts of the mire, flux and ecosystem measurements have been performed since 2001 , but the current station was rebuilt in 2012/13 to fulfill the specifications of ICOS.

The ecosystem station at Degerö studies the exchange of greenhouse gases, water vapor, and energy between the forest and the atmosphere. By measuring the gas concentrations at the same time as the vertical movements of the air, with high time resolution, the flows to and from the mire can be calculated. Thus, researchers can deduce how much carbon dioxide the mire takes up or releases.

Furthermore, a number of meteorological variables are measured such as short- and long-wave radiation, wind speed, air temperature, air moisture, and precipitation. Other important ecosystem parameters of the mire such as soil temperature and moisture are also monitored periodically. 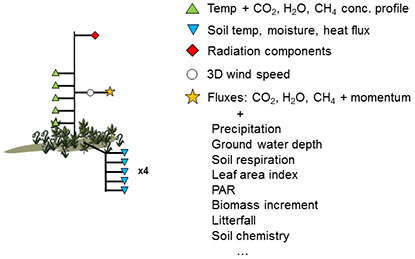 Integrated Carbon Observation System (ICOS) is a European research infrastructure established to quantify and understand the greenhouse gas balance of the European continent and of adjacent regions. Generally, it is important to quantify the greenhouse gas balance in Europe and, from a societal perspective, it will be possible to connect measurement results with environmental objectives. As of 2015, seventeen countries are represented in ICOS. The Swedish ICOS is financed by the Research Council, the University of Lund, SLU, the Swedish Polar Research Secretariat, and the University of Stockholm.

Data from all ICOS stations will be gathered in a freely available central database which is currently under construction (September 2015). Also, various data products will be published regularly—for example, maps of the total European carbon dioxide budget. 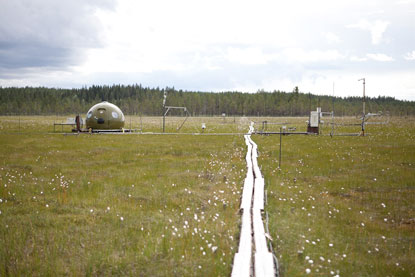 In the middle of the mire, there is a small dome shaped house called "the igloo". From here the researchers can manage measurements and data.

Visit our PhenoCam that is continously monitoring the mire