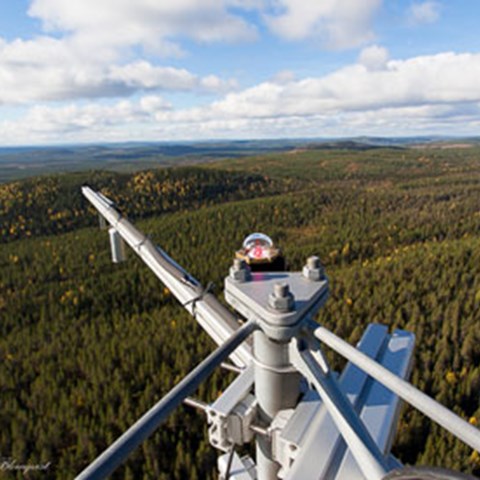 The Svartberget atmospheric and ecosystem station measures the concentrations of greenhouse gases in the atmosphere and the gas exchange between the atmosphere and forest ecosystems. The station location represents the conditions in Scandinavian boreal forests and is part of a network of stations within Integrated Carbon Observation System (ICOS) - a European research infrastructure established to quantify and understand the greenhouse gas balance of the European continent and of adjacent regions.

In the central parts of Krycklan catchment, about two kilometers from Svartberget Research Station, a combined atmospheric and ecosystem station with a 150 meter high mast was established in 2012 to fulfill the specifications of ICOS. The location of the station was strategically chosen based on hydrological and biogeochemical research that has been going on in the catchment area since the mid 1980s. There is thus potential for considerable enhancement into broader ecological systems research.

Systematic measurements of greenhouse gases in the atmosphere is an important part of environmental monitoring, particularly with reference to the control of international commitments to reduce carbon emissions. The increase of atmospheric greenhouse gases - caused mainly by the burning of fossil fuels -  affects the radiation balance at the earth's surface and leads, in the long term, to climate warming.

The atmospheric station measures the concentration of greenhouse gases in the atmosphere at 15 different height levels from four meters up to 150 meters. In addition to the greenhouse gases carbon dioxide, carbon monoxide, and methane, temperature and water vapor are also measured. Above the tree canopy, gas concentrations are not directly affected by conditions in the forest directly below, but they do reflect emissions and uptake from a much larger area. In fact, gas concentrations measured here indicate the precence of  air transported hundreds or thousands of kilometers from the measuring station!

The ecosystem station measures the exchange of greenhouse gases, water vapor and energy between the forest stand and the atmosphere. By simultaniously measuring gas concentrations and atmospheric vertical movements using high time resolution, the gas fluxes to and from the forest can be calculated - i.e. how much carbon dioxide is taken up or released by the forest ecosystem. Moreover, a range of meteorological variables are measured such as short- and long-wave radiation, wind, air temperature, humidity, and precipitation. Also conditions in the forest - such as soil temperature and moisture, as well as tree-temperature and solar radiation under the canopy - are continuously recorded.

In addition to the long-term measurements takenwithin ICOS, a large number of other research projects are established at the site. 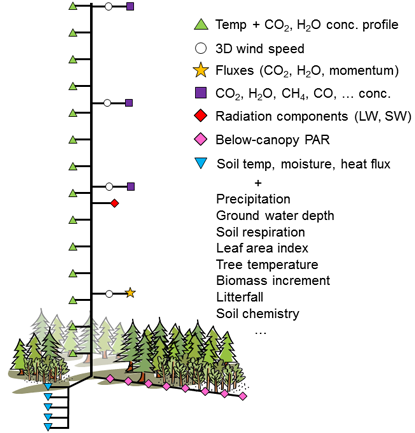 The 150-meter high mast and related equipment requires supervision and service throughout the year. Any work on the mast requires professional training and authorization by ICOS. Staff working on the mast have valid certificates and undergo routine training and medical inspection.

Integrated Carbon Observation System (ICOS) – is a European research infrastructure established to quantify and understand the greenhouse gas balance of the European continent and of adjacent regions. Generally, it is important to quantify the greenhouse gas balance in Europe and from a societal perspective it will be possible to connect measurement results with environmental objectives etc. As of 2015, seventeen countries are represented in ICOS. The Swedish ICOS is financed by the Research Council, the University of Lund, SLU, the Swedish Polar Research Secretariat and the University of Stockholm.

Data from all ICOS stations will be gathered in a freely available central database which is currently under construction (September 2015). Also, various data products will be published regularly - for example, maps of the total European carbon dioxide budget.

ICOS has released a video featuring the activity at Svartberget, which you can watch here:

The house besides the atmospheric and ecosystem station contains equipment for working in the mast: instrumentation, gas analyzers and computers. The house provides electricity, internet and temporary workplaces.