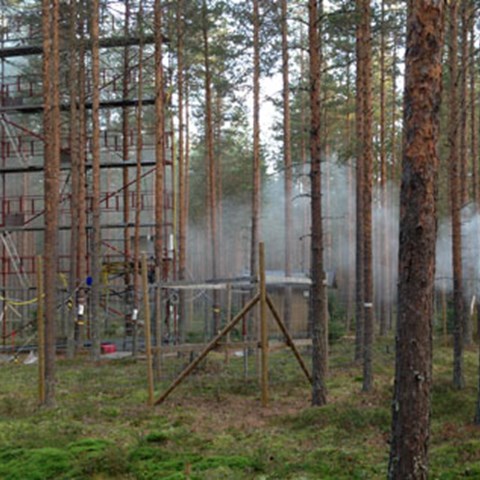 In the experimental area at Rosinedal, researchers are investigating how the input of nitrogen affects tree growth. Tree growth is closely linked with forest carbon sequestration and therefore the studies also refer to the question if nitrogen deposition leads to increased carbon storage in the forest.

The test area is located in Rosinedalsheden, a forest stand just east of Vindeln. The forest consists of naturally regenerated 80-year old pine trees and the soil is a deep deposit of sand and fine sand. The ground vegetation is dominated by blueberries and lingonberries. The experiment was laid out in the summer of 2005 and annual nitrogen fertilization started in 2006.

The experiment site includes three plots of 13-15 hectares each. The treatments, performed over the entire surface, consist of an annual deposition of 20 kg per hectare of added nitrogen in one plot, 50 kg in another, and none in the control plot. The initial nitrogen addition rate in the 50-kg plot was 100 kg per hectare. In the center of each plot is a climate station and a mast, from which atmospheric carbon and water fluxes are measured by the eddy covariance technique.

The researchers use different approaches to study carbon fluxes and carbon storage in the forest stand. With eddy flux technology, the exchange of carbon between the stand and the atmosphere is continuously recorded. This technique provides an integrated value that describes the forest stand’s carbon balance. Furthermore, individual physiological processes associated with tree growth and carbon sequestration are measured in chambers: photosynthesis, transpiration and respiration from stem and needles, ground vegetation, and roots.

The experimental area in Rosinedal is almost ideal for this type of study. Its uniform stand structure and the relatively flat terrain simplify the use of the eddy flux technique. That the stand is even-aged and consists of just one tree species — pine — also simplifies the physiological measurements of trees and other vegetation.

Studies are being conducted by researchers at the SLU forest faculty as well as by numerous domestic and international guest researchers.