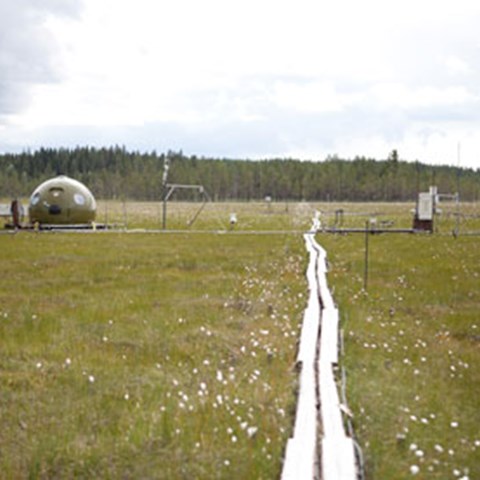 Degerö Stormyr is one of the most intensively studied mire ecosystems in the northern hemisphere. The longest time series analysis in the world of carbon and greenhouse gas balance in a mire is being conducted here.

Degerö Stormyr is a nutrient-poor minerogenic mire — i.e. receiving water and nutrients from the surrounding catchment—and is thus representative of many high latitude mires. The area is situated at Kulbäcksliden in Vindeln municipality 270 meters above sea level and covers an area of 6.5 km2.

The bedrock consists of gneiss. The nutrient-poor mineral soil and bedrock result in nutrient-poor conditions, which are clearly reflected in the species composition of the mire plant communities. The open mire areas, inhabiting most of the ongoing research sites, are dominated by flat mire sedge communities with bog mosses (Sphagnum balticum, Sphagnum majus and Sphagnum Lindbergii) dominating the bottom layer. The field layer is dominated by Cottongrass (Eriophorum vaginatum), and by the dwarf-shrubs of Cranberry (Vaccinium oxycoccos L.), Bog- Rosemary (Andromeda polifolia), and Deergrass (Trichophorum cespitosum). Other sedges, such as Carex spp., occur more sparsely.

Mires and bogs are common in the Swedish forests and are vital for landscape biodiversity, water quality in streams and lakes, and healthy greenhouse gas balance. Mires make up only three percent of the Earth's land area but contain about 25 percent of all organic carbon stored globally in the ground. At the same time, northern mires emit 10-30 percent of the methane emitted annually from natural ecosystems.

The overall goal for the current research is to understand the role of mires for global carbon and greenhouse gas dynamics and exchange. A further major objective is to understand how these functions may change in response to external forces — e.g. changed climate and changed nutrient availability. 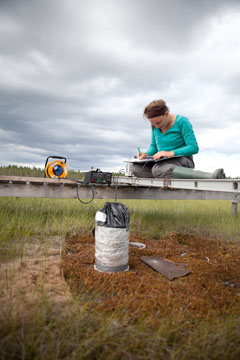 Other important research questions are: What significance do the mires have for the presence of mercury in, for example, fish? How are different microorganisms affected by the deposition of nitrogen and sulphur, and by increased temperature? How important are frost and snow depth for mire plants, peat formation, and methane discharge?

Research is conducted by scientists from all major Swedish universities, and also by many international research groups. 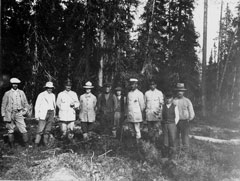 The Degerö Stormyr has a long history of scientific research. The first scientific investigations started in 1911.  The main reason for the early research activities was the belief that bog moss (Sphagnum spp.) was about to spread from mires into surrounding upland forests, thus threatening the Swedish forestry industry. The first PhD-thesis from the site was published in 1923, by Carl Malmström, showing that the fears of moss invasion were unfounded: “A study of botanical, hydrological and mire development at a mire complex in northern Sweden”.

Publications based on data from Degerö.