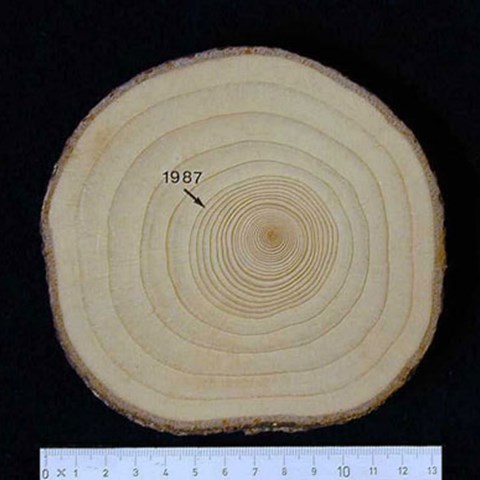 The goal of the research at Flakaliden is to demonstrate the upper limits of productivity of Norway spruce in Northern Sweden when neither nutrients nor water are limiting growth. Since 1987, researchers have fertilized the large experimental plots, giving the individual trees optimal nutrient treatments.

Flakaliden is situated 23 kilometers southwest of Vindeln and 60 kilometers west of Umeå. The Flakaliden experiment was set up in 1986 in a young Norway spruce stand which was planted in 1963 after felling, prescribed burning, and soil preparation. The area is situated above the highest shoreline in the province of Västerbotten, 310 meters above sea level. The soil at the site is a thin, very rocky, well-developed iron podzolic, and sandy, post-glacial till of gneissic origin.

The long-term experiments show that it is possible to increase growth of Norway spruce by more than double. Thus, it is not the harsh climate or the slow growing tree species that limit the growth in Swedish forests. Rather, it is the availability of nutrients — in Northern Sweden, mainly nitrogen — that is limiting growth.

Research at Flakaliden has made enormous contributions to our understanding of the role of nutrient supply in boreal forest growth and ecosystem function, in addition to clearly identifying the critical importance of nutrient availability in the response of forest growth to increased air temperature and elevated CO2 concentrations.

The sketch below shows all experimental plots with various treatments. Click on the picture for a larger version. 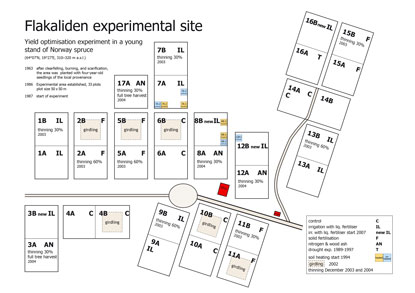 In 2005 the whole-tree chambers were disassembled after ten years in the service of climate change research. In the chambers, researchers studied the effect of increased temperature and CO2 concentration on 40-year-old Norway spruce. Previously, this had only been carried out on small plants. The research has provided unique insights regarding the effects of climate change on boreal forests — for example, in terms of bud break and photosynthesis processes. The development of the whole-tree chambers at Flakaliden was a major technological advance for whole-tree physiology.

Today the whole-tree chambers are used in Australia.