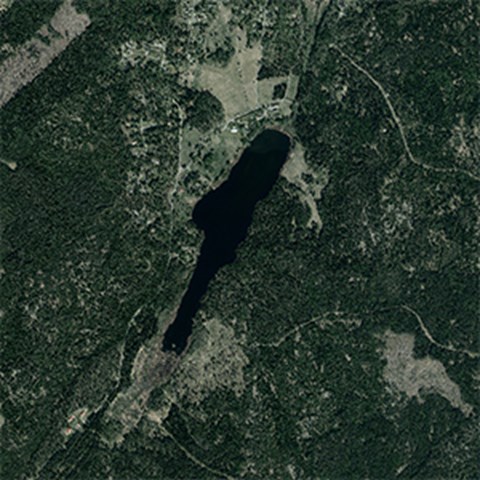 Edasjön east of Uppsala is one of the lakes monitored in the programme. Image: Lantmäteriet.

The component programme Trend lakes is part of the Freshwater programme of the Swedish Agency for Marine and Water Management (Havs- och vattenmyndigheten), within the national environmental monitoring. The overall objectives are to describe conditions and large-scale changes in the water environment, and to provide a basis for evaluating hazard images and potential measures, in a nationally representative selection of watercourses that are not impacted by local/regional effluent discharge or intensive soil usage.

The results from our trend lake investigations may be used as reference for interpreting periodical national inventories, and also for evaluating changes in more impacted areas. Long time sequences are of particular value for tracking effects of climate change, and predicting future changes. The results will also serve as a basis for evaluating different environmental quality objectives.

The trend lakes are complemented primarily by Cyclically monitored lakes and Trend watercourses. The cyclically monitored lakes are investigated at low intensity (once every six years), but with their larger areal coverage they provide a more exhaustive picture of the state of Swedish lakes, while the trend lakes chiefly monitor how changes occur over time. In the trend watercourses, respective monitoring is conducted in running water.

The monitoring programme comprises sampling and analysis of chemistry, benthic fauna and phytoplankton in 106 lakes, whereas fish is sampled in 45 of those. Surface water is sampled for chemical analysis four times per year – one sample per season. Every year, sampling of phytoplankton and benthic fauna take place in approximately 100 of the lakes. Phytoplankton is sampled in late summer (August), whereas benthic fauna is sampled in autumn (October). Ten of these lakes are examined more intensively, with monthly sampling for chemical analysis (except when the surface is frozen in winter). Included are also metal analyses twice per year, and phyto- and zooplankton sampling four times per year. In addition, yearly fish sampling is conducted by the Department of aquatic resources, and benthic fauna is sampled at littoral, sublittoral and profundal levels. In five of the other lakes, additional fish sampling is made annually, and, in another 30 lakes, the fish sampling occurs cyclically such that each lake is sampled once every sixth year.

The lakes are medium-sized, with areas between 0.02-52.6 km2, with an average lake area of 2 km2. The programme commenced in 2007, but most lakes were part of an earlier programme for reference lakes that started in 1984 (called time series lakes 1995-2006). The lakes were then selected to represent unlimed lakes, susceptible to acidification, across the country, but with clear emphasis on southern Sweden. In an audit 1995-1996, the programme was complemented with additional lakes in northern Sweden, and the inclusion of brown water lakes and floodplain lakes. The purpose of the programme was thus expanded to constituting reference material for all Swedish lakes largely unaffected by point effluents and heavy soil usage other than forestry. With the 2007 audit, a further addition of lakes was made in order to represent all limnic types, for report according to the Swedish Water Administration Regulation (Vattenförvaltningsförordningen) 2004:660 (VFF).