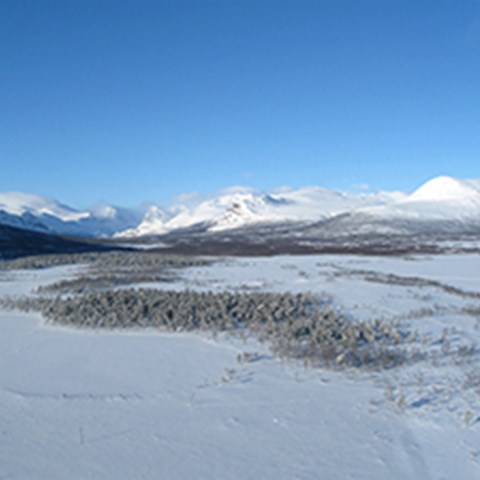 Today we have on-going projects in the counties of Gävleborg, Västerbotten, and Norrbotten, Northern Sweden (the counties of Västerbotten and Norrbotten) has a long tradition of moose research, using VHF technique since the late 80s. In winter 2003, we started data collection using GPS technique. During the winter of 2009, we started our first projects in the southern part of Sweden with marking moose with GPS neck collars in the counties of Kronoberg (Växjö) and Sörmland (Öster Malma). In the winter of 2010 and 2012, we also equipped moose with GPS neck collars in the county of Kalmar. Here, we studied moose movement, habitat use, reproduction, and interaction with other ungulates. GPS-marked moose in northern and southern Sweden give us the opportunity to look at research questions that are specific to a given area or region, as well as questions that deal with the comparison of moose behavior among different populations. Particularly interesting is the comparisons between northern and southern Sweden, and how moose adapt to climate in the different areas as well as how it tackles the change of the climate. Some of our marking projects have been completed by now, others are still on-going thanks to many different sources of funding. More information about a given projects can be found under the different links below. For the on-going projects, you will find a link that brings you to our webpage where you can monitor moose movement in near real time by choosing an individual moose or looking at the current distribution of all GPS-marked moose in this area. 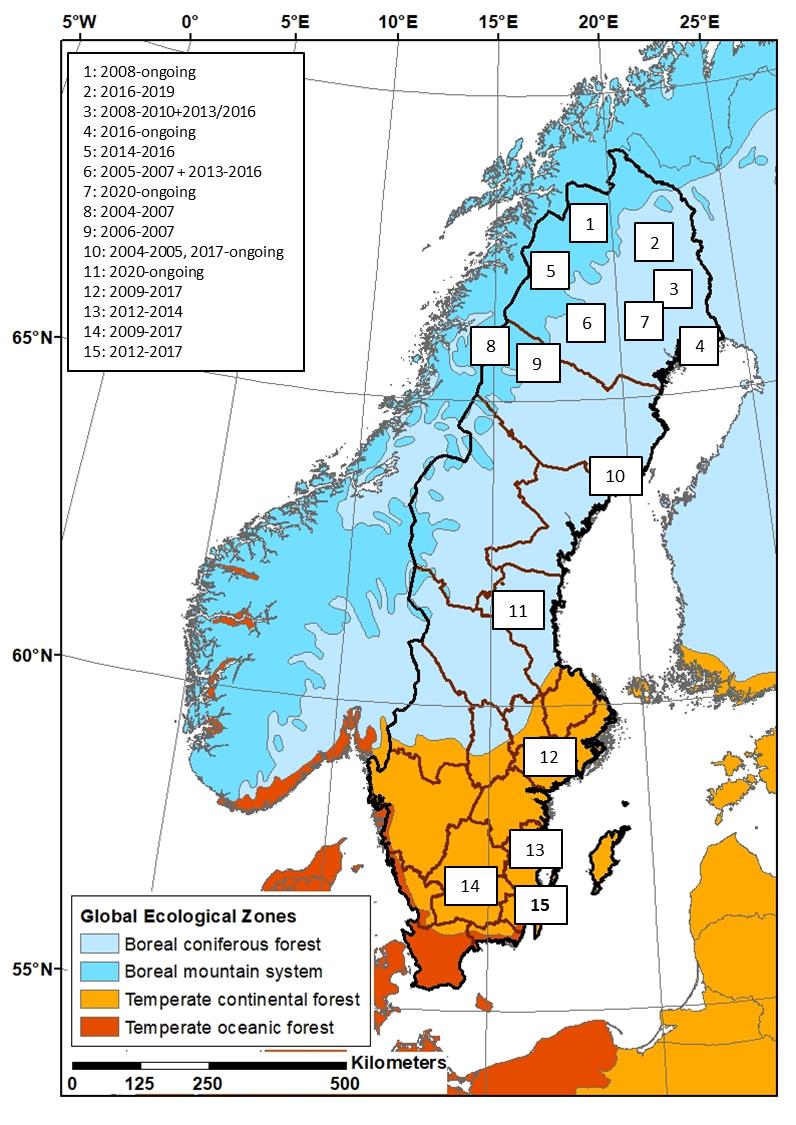 Distribution of moose marking project in relation to different ecological zones and county borders (brown lines) in Sweden, 2003-until today.

Research on moose has a long tradition in the county of Norrbotten. During 2005-2007, we monitored marked moose in the area around Arjeplog, and in winter 2008, we marked 50 moose in two specific areas, Överkalix and near the mountains at Nikkaluokta. One of the central research question were how moose range and migrate seasonally and in relation to the environment. In 2012, we removed the tracking devices for moose around Överkalix, but continued and intensified our research effort on moose in Nikkaluokta, and our research in this area is ongoing since then. Key questions are the behavioral and physiological response by a large herbivore to a changing climate, but also to intensive human activities. To track moose physiology in relation to external factors, we equipped 16 moose with additional sensors to monitor heart rate and body temperature.

In winter 2013, a major marking effort took place where we equipped 90 moose in three different areas (Arvidsjaur, Niemisel and Ängesån). One focus was to improve our knowledge about the migration behavior of moose in these areas to be able to adjust management measures. In winter 2014, additional 22 moose were marked in the area around Tjåmotis near the National Park Sarek. In both projects, the neck collars were removed in March 2016 and moved to new areas within Norrbotten (Haparanda Kalix, Junosuando, Lina River, Svappavaara). The projects will last until in March 2019. Whereas we removed the tracking device for most moose, we exchanged the devices for some of the moose that range considerable parts of the year or the entire year in the outer Haparanda/Kalix archipelago. Here, we study their utilization of this special living environment.

In total, 384 different adult moose have been marked with GPS collars in Norrbotten by the end of 2020.

Like in Norrbotten, research on moose has a long tradition in the county of Västerbotten. After decades of VHF-markings, we equipped the first moose with GPS-tracking devices in winter 2003.  Within this project, 25 female moose were marked, and the neck collars we moved annually to new moose in another area; from Åsele (2003/2004) to Nordmaling (2004/2005) to Hällnäs (2005/2006), and finally to Mala (2006/2007). Our study focus was size and distribution of moose home ranges, migration behavior, and reproduction. At the same time in November / December 2004, we started a project within the program "Moose in MidScandia", which was a collaboration between Sweden and Norway. The project officially ended in 2007. Here, moose were marked in three different areas around the Swedish / Norwegian border; Krutfjell, Krokstrand, and Skalmodal. Markings in this project differed from the markings in all the other areas, because moose were marked in their summer ranges (i.e., in the mountains)! Usually, moose are marked in February / March, which generally covers moose’ winter ranges. One reason for the different timing of marking in this project was the need for better knowledge about the proportion of moose that moved during the winter to the forest areas in the different sides of the border, i.e., to Norway and Sweden. Beside migration behavior, we studied also moose home range size and habitat utilization.

In February 2017, we equipped 27 female moose with GPS neck collars in the Nordmaling area near the coast. This marking project belongs to the research program Beyond Moose. The marked moose will help to increase our understanding of how moose move in the landscape and how they utilize their habitats within ungulate multi-species systems. The Nordmaling area is unique as it is the only area this far north that has four different ungulate species: roe deer, fallow deer, red deer, and moose. Within this project, another project is joining the marking effort - veterinarians Jon Arnemo and Alina Evans study the ecophysiology of moose. Here, moose are not only equipped with a GPS neck collar, but also carry a little sensor in the stomach and under the skin that measures physiological data such as body temperature and heartbeat.

In summer 2018, three major forest fires took place in the municipality of Ljusdal (Ängra, Nötberget och Enskogen), next to some smaller fire areas. In total, they affected an area of ​​9,500 hectares, thereby changing dramatically the habitat conditions for the wildlife living there. Moose are a species that is well adapted to disturbed forest environments where a lot of new vegetation arises. As well as after the storms Gudrun and Per in the county of Kronoberg that transformed large parts of the older forest landscape into young forest, forest fires increase access to young forest environments. During winter 2020, we tagged 25 adult moose in the municipality of Ljusdal to study their distribution across the landscape and habitat utilization in relation to the fire field, as well as to monitor their reproduction (number of calves and survival).

While research on moose has a long tradition in northern Sweden, studies in southern Sweden were limited. Yet, change was about to come. In February 2009, we marked the first moose with GPS neck collar in the area at Öster Malma (latitude 58) and around Växjö (latitude 57). In February 2009, we marked 25 moose in the area near Öster Malma. More moose marking have followed during the last years, partly to replace losses during earlier years and partly because of intensifying the research effort in the area. Since 2015, Öster Malma is part of the reference areas within the research program BEYOND MOOSE that addresses multi-species issues. As the area Växjö, Öster Malma is a very exciting study area for several reasons. First, questions concerning moose and forestry are central, but almost more important the area is unique with respect to occurrence and densities of several different ungulate species. By the end of 2017, 75 adult moose (57 cows, 18 bulls) have been marked and we have been able to document the birth and survival of 124 calves of the year. The project is basically finished, but some moose have still their devices.

In February 2009, we marked the first moose with GPS neck collar in the area around Växjö (latitude 57) and at Öster Malma (latitude 58). The following years, more moose were marked, partly to replace losses during earlier years and partly because of intensifying the research effort in the area. The area around Växjö is very exciting for several reasons. Questions concerning moose and forestry after the storms "Gudrun" (2005) and “Per” (2007) are central, but the area is also very interesting for that fact that it is a multi-species ungulate system. Moreover, major roads and high human density, and thus traffic volume makes the area also interesting for questions on wildlife and traffic. By the end of 2017, 65 adult moose (49 cows, 16 bulls) have been marked in the area, and we have been able to document the birth and survival of 255 calves of the year. The project is basically finished, but some moose have still their devices.

In early January 2010, we equipped 26 moose with GPS neck collars in the area around Misterhult (6 bulls and 20 cows). The area is very suitable for studying moose – forestry interactions as well as multi-species system as several ungulates species occur in the area. In addition, the highway E22 runs right through the study area, giving the opportunity to study wildlife and traffic interactions, given resource are available. The project was completed in 2012.

In February 2012, we marked 25 moose on the island Öland. The island is very special and provides very unusual moose habitat as more than 50 % of moose home range are arable land. The major research question in this area concerns the summer survival of calves of the year. Local observations suggested a very low summer survival. In order to study calf survival and to understand the factors that affect it, we make a special research effort in this area. Here, we marked a part of the calves-of-year to monitor closely their summer survival. In order to be able to compare calf summer survival on Öland with other moose populations in southern Sweden, was also marked calves in the reference area around Växjö and Öster Malma. By the end of 2017, 37 adult moose (30 cows, 7 bulls) have been marked on Öland, and we have been able to document the birth and survival of 106 calves.