We have an ongoing extensive research effort about movement and migration behavior of moose in the county of Norrbotten in northern Sweden. We marked 90 moose (68 females, 22 males) with GPS neck collars and distributed them about 3 different areas that are of interest for moose management. In each area, we mapped movement patterns and habitat choice of adult moose over the year. The study was initiated as a management marking project as the areas of interest experience major damages on young forest in winter. Results from this study aid management to target measures more efficiently in order to reduce forest damages caused by moose browse. The 3 areas are placed at the coast (in the Archipelago around Kalix and Haparanda) and in the inland (Gällivare and Junosuando). We initiated this research effort in March 2013 where first 90 moose were equipped with GPS neck collars in the areas around Arvidsjaur (inland, closer to the mountains), Ängesån (near Överkalix in central inland), and Niemisel (north of Råneå, closer to the coast). We followed the movement of moose in these areas for 3 years until March 2016 when the project ended. The project has been prolonged, and we moved the tracking devices to the 3 new areas in March 2016; Haparanda/Kalix archipelago, east of Gällivare and south of Junosuando. The project is funded via the county moose management fund, the Swedish Association for Hunting and Wildlife Management Norrbotten, and land owners comprised of Sveaskog, SCA, the Northern forest owners, the National Property Board of Sweden, Allmänningarna, the Church, and the Federation of Swedish Farmers. The final report of the first phase of the project (2013/2016) with the areas Arvidsjaur, Ängesån and Niemisel is accessible online, please see this report. The final report of the second phase (2016/2019) with the areas Haparanda/Kalix, Gällivare, and Junosuando is accessible online, please see this report. Both reports are in Swedish. 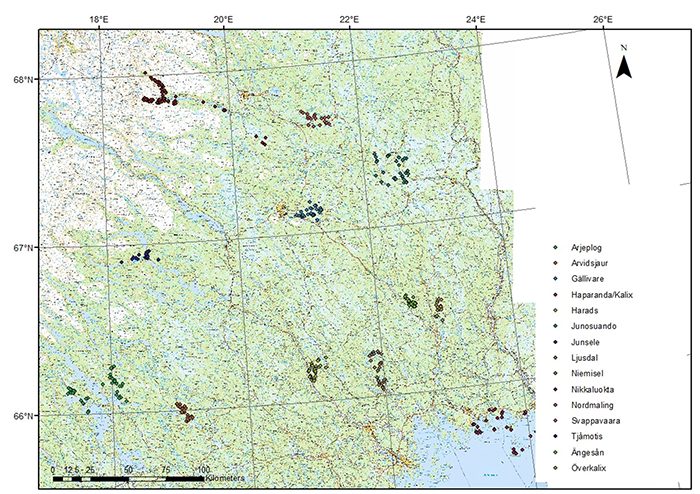 In March 2014, additionally to the research effort above, a sister project started where we marked 22 moose in the area around Tjåmotis near the National Park Sarek. As the areas mentioned above, the Tjåmotis area also received large damages on young pine forest in winter. Special here was that major parts of the moose migrated into the National Park Sarek in early summer and stayed there large parts of the moose hunting season. The research effort in Tjåmotis was independent of the project mentioned above, but data were analyzed in the same way and in parallel with other projects. After 2 years in winter 2016, the project ended and we removed the neck collars. This project has been prolonged as well and in March 2016, we marked 20 adult moose (15 females, 5 males) in a new area in the central of the county of Norrbotten around the village Svappavaara, which is located between Gällivare and Kiruna. The project ended in 2019and was funded by the County Board of Norrbotten, the National Property Board of Sweden, and Sveaskog. The final report of the project's first phase (2014/2016) with the area Tjåmotis is accessible online, please see this report. The final report of the second phase (2016-2019) in Svappavaara is also accessible online, please see this report. Both reports are in Swedish.

In winter 2020, a new project started where 30 moose were equipped with GPS transmitters in Harads to study migration patterns of these moose and provide a better basis for moose management in this area.

- We want to get a moose population that is in balance with its forage resource. Today, we have -with few exceptions- too many damages by moose on young pine forest in the county. In the areas where we mark moose, we have high densities of moose in winter that cause enormous damage especially on young pine forest. Although the coastal country is not a typical area with large winter concentration of moose and that have high damages because of this concentration, says Marcus Jatko, hunt and deer manager at Sveaskog and Chairman of the Forestry Hunting Group Norrbotten.

- Previous studies have shown that some moose are in the same place year around while others migrate between their summer and winter ranges. Yet, we do not know how large the proportion of the population is that migrates and how far the migrants go. Here we want to have more knowledge, says Göran Ericsson at the Swedish University of Agricultural Sciences (SLU).

- Where the moose are during January and February, they are not in September and October when the moose hunt takes place. We want to have a more even moose population among years and this way provides a better basis than inventories by plane, says Björn Sundgren, Game Management consultant at the Association for Hunting and Wildlife Management North.

Understanding how moose utilize the outer archipelago and move between the islands, thereby taking advantage of this special landscape is exciting. Can we compare the islands to attractive habitats in the forest landscape on the mainland? Today we follow 13 moose (10 cows, 3 bulls) that spend a large part of the year and are year round on the islands. The project is fully funded by SLU.

Very different research topics are in focus for the moose marking project around the village of Nikkaluokta; here, we study the behavioral and physiological response of a large herbivore to a changing climate in high alpine area. The project started in 2008 and to start with, we marked 20 adult moose (16 females, 4 males) in the area around the village of Nikkaluokta. We track moose physiology in relation to external factors with help of MIT-sensors. In 2012 and 2014, we equipped a total of 16 different moose with those sensors in addition to the GPS collar. MIT sensors monitor heart rate and body temperature. Another interesting research topic in this area concerns the intense human outdoor activities, particularly during winter, which take place the Nikkaluokta and Kebnekaise. By the end of 2020, 68 adult moose (51 females, 17 males) have been marked in this area. Since 2008, the project has had different sources of funding, and during the latest years it has been funded by SLU. 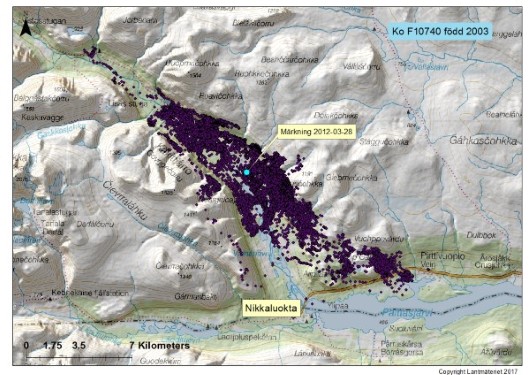 Please use the link below to see the movement patterns of the GPS-marked moose in Norrbotten.

http://webmap.slu.se/website/moosetrack_BD/ (opens in a new window)

If the map does not appear, your browser window may need to be reduced in size and/or popup blockers must be disabled.