During the winter of 2003, we marked 25 female moose with GPS collars. The project was funded by the County Administrative Board in Västerbotten, landowners, and the Swedish Association for Hunting and Wildlife Management in Västerbotten. Annually, we moved the neck collars among individuals in different areas; from Åsele (2003/2004) to Nordmaling (2004/2005) to Hällnäs (2005/2006), and finally to Malå (2006/2007). Our study focus was size and distribution of moose home ranges, migration behavior, and reproduction. In total, 102 different moose were marked within this project that ended in 2007. In November/December 2004, we started a project within the program "Moose in MidScandia", which was a collaboration between Sweden and Norway. The project officially ended in 2007. Here, moose were marked in three different areas around the Swedish / Norwegian border; Krutfjell, Krokstrand, and Skalmodal. Markings in this project differed from the markings in all the other areas, because moose were marked in their summer ranges (i.e., in the mountains)! Usually, moose are marked in February/March, which generally covers the winter ranges. One reason for the different timing of marking in this project was the need for better knowledge about the proportion of moose that moved during the winter to the forest areas in the different sides of the border, i.e., to Norway and Sweden. Beside migration behavior, we studied also moose home range size and habitat utilization.

In February 2017, the BEYOND MOOSE program equipped 27 female moose with GPS neck collars in the Nordmaling area near the coast. The marked moose will help to increase our understanding of how moose move in the landscape and how they utilize their habitats within ungulate multi-species systems. The Nordmaling area is unique as it is the only area far north that has four different ungulate species: roe deer, fallow deer, red deer, and moose. Within this project, another project is joining the marking effort - veterinarians Jon Arnemo and Alina Evans study the ecophysiology of moose. Thus, moose are not only equipped with a GPS neck collar, but also carry a little sensor in the stomach and under the skin that measures physiological data such as body temperature and heartbeat. 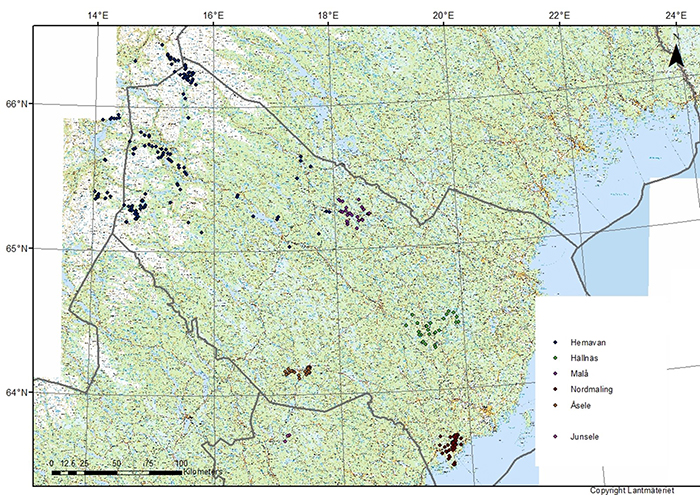 Please use the link below to see the movement patterns of the GPS-marked moose in Västerbotten.

http://webmap.slu.se/website/moosetrack_BD/ (opens in a new window)

If the map does not appear, your browser window may need to be reduced in size and/or popup blockers must be disabled. 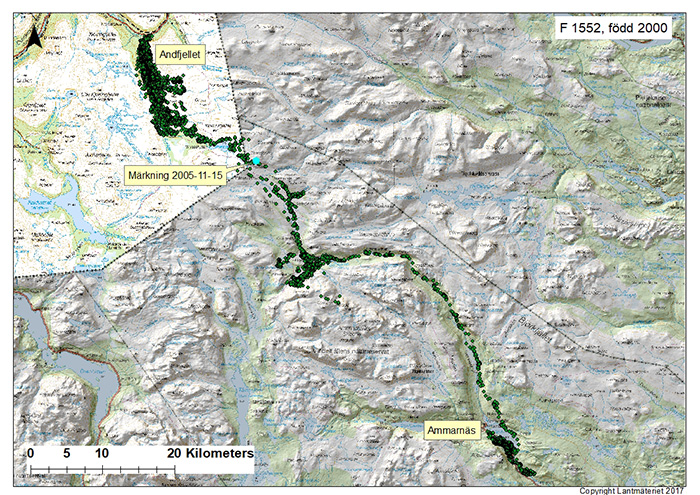 Map showing the migration of a tagged moose between Sweden and Norway.