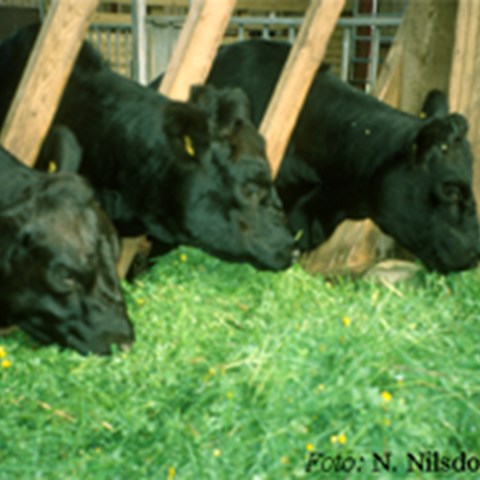 Ley growing and grazing occupy a central role in organic production. The legume birdsfoot trefoil (Lotus corniculatus)has attracted great interest in recent years as a complement to more common legumes used mainly for grazing. Since 1997, birdsfoot trefoil has been studied with respect to crop growing characteristics, feed utilisation and parasitological aspects, with funding from SJFR and the Swedish Board of Agriculture (Jordbruksverket). As part of this project, studies on grazing beef cattle have been carried out at Rådde Experimental Farm and 2002 was the last research year in this interdisciplinary project.

In some cases, earlier studies have shown increased growth of beef animals grazing birdsfoot trefoil leys compared with white clover leys. A behaviour study also showed that beef animals, given the choice, grazed significantly more of the birdsfoot trefoil ley (61% of the observed time) than the white clover ley. However, without accurate estimates of daily feed intake and nutrient content, it is difficult to draw conclusions regarding whether the higher growth on birdsfoot trefoil grazing was due to greater feed intake or better nutrient utilisation. The present complementary consumption study on stall-fed animals aims therefore to obtain a more reliable estimate of feed intake than that achieved earlier in the grazing study.

The aim of the study is to quantify the relationship between dry matter intake and animal growth in plots with birdsfoot trefoil or white clover, and to study whether there are differences in feeding behaviour as regards selection between the legume species. The latter will be manifested through differences in chemical analysis of the feed given and feed residues.

In conjunction with the stall-feeding trial, beef heifers are grazing either white clover- or birdsfoot trefoil-based ley in the grazing study and growth of the animals is being monitored during the entire period. Plant material from the same leys is also being used for the indoor study, where different groups of beef animals are fed either birdsfoot trefoil/grass forage or white clover/grass forage for one month. This means that direct comparisons can be made between consumption of both species mixtures in the stall and animal growth on grazing.

The amount of feed and its dry matter (DM) content are determined daily before feeding for each group. In addition, residues are weighed and their DM content determined. The botanical composition of the feed is being determined and its nutrient quality analysed with respect to crude protein, energy, fibre and condensed tannins. The animals are weighed at the start of the study, after two weeks and at the end.