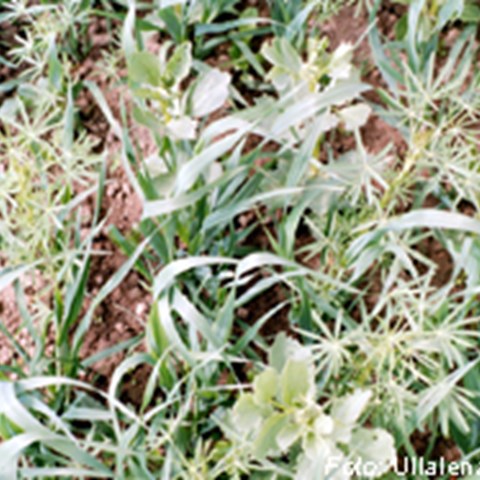 The forage used today for cattle mainly consists of grass and clover from perennial leys. The legumes in the ley fix atmospheric nitrogen and thereby also provide an important nitrogen supplement to following crops. For the organic farmer it is advantageous, both from a soil fertility and animal feed perspective, if annual nitrogen-fixing crops can be included in the crop rotation.

Through intercropping cereals and pulses (e.g. peas) for whole crop silage, the entire crop can be harvested on a single occasion - and an energy and protein-rich feed is obtained.

Despite the fact that cereals grown for whole crop silage have been relatively common in e.g. Denmark, they have been uncommon in Swedish conventional farming. Within organic farming, however, the method has been used to a greater degree. By tradition, the combination oats/peas is commonly used but other mixtures are also possible.

The risk for attack by pea root rot (Aphanomyces euteiches) means that peas should not recur more often than every sixth to eighth year in the crop rotation and it is therefore of great interest to investigate the possibility of combining the cereal with another nitrogen-fixing legume faba beans (Vicia faba) and various species of lupin (Lupinus angustifolius, blue or narrow leafed lupin, Lupinus lutea and Lupinus alba) are all nitrogen-fixing but are not attacked by pea root rot and can therefore be appropriate replacement crops.

The older lupin types contained high concentrations of alkaloids and tannins, which made them less suitable as feed. The varieties available today are considered suitable as feed for both cattle and pigs. Time of harvest is decisive, not only for its effect on the feed value of the crop but also for the ease with which the material can be ensiled. The weed competitive ability of different combinations of cereals and legumes is very variable. Both narrow-leafed lupin and faba have low competitive ability against weeds at their early stages of development.

The aims of the project is to study the effects of weed harrowing and time of harvest on faba beans, lupins, spring wheat, oats and barley intercropped at various combinations.