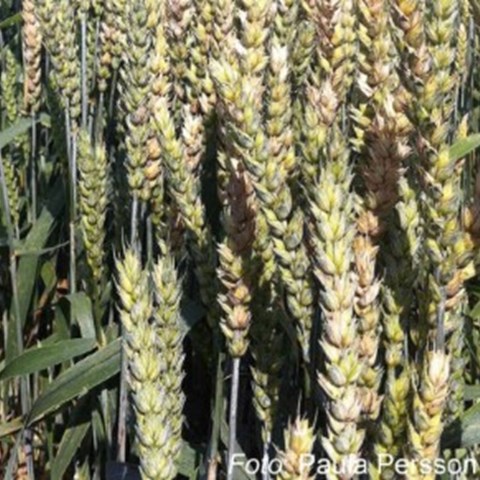 Variety and species mixtures for healthy crops with high quality

The basic idea with this project is to prevent pathogen propagation by mixing cultivars or species with different disease susceptibility. The increase in genetic diversity gives in addition stability in the production. An undersown nitrogen-fixing crop would act as a barrier to further spread upwards in the canopy, when infected plant debris is present on the soil surface.

The project will focus on small grain cereals and the spread of the Fusarium fungus causing root and stem base rot as well as head blight. The Fusarium pathogen produces in addition mycotoxins, already in the field, which has caused major problems in Swedish cereal production in oats and wheat recently, also in crops not showing any symptoms of disease. Fusarium graminearum has been the cause of the problems producing the mycotoxin deoxynivalenol DON, which seriously affects both humans and animals. The detected DON in produced cereals has been very high and by far exceeded the EU-limits set for food. However, mycotoxins also affect monogastric animals and cereals are the main ingredient in feed for pigs. From 2015, all feed used in organic animal production is to be produced organically and half of it should be produced on the own farm. The pigs should have free access to roughage which during the winter season can be cereal straw, also known to include Fusarium mycotoxins.

To minimize the mycotoxin problem it is necessary to prevent Fusarium to establish and multiply. The project will study Fusarium development and mycotoxin production in crops specifically aimed for own farm pig feed production. Fusarium and mycotoxin development will be studied in field trials with three-cultivar mixtures of oats or spring wheat compared with each variety in pure stands, together with oat-pea and faba bean-spring wheat combinations. The plots will be inoculated with F. graminearum at the time for sowing.