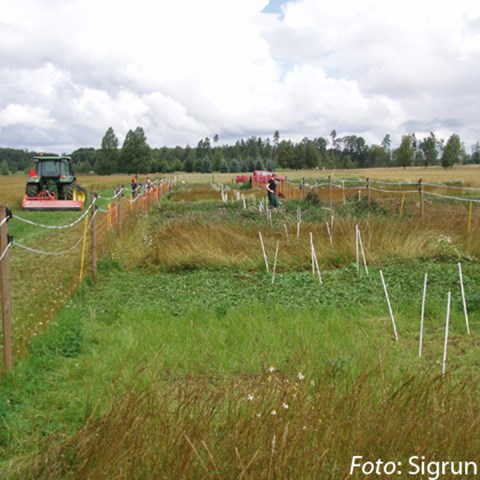 Quantification of nitrogen in the entire plant and in rhizodeposits

We have currently very little field data on below-ground amounts of nitrogen fixed in leys and how these are affected by management practices such as trimming regime. Our own results from a model experiment indicate that the relative proportions of above-ground and below-ground plant-derived nitrogen are substantially affected by trimming. In contrast to fodder leys, the trimmings are left on the ground in green manure leys. Very little is known about how this affects further nitrogen fixation, stabilization of nitrogen in the soil or residual nitrogen effect.

In this project, we are aiming to:

The project is co-funded by Formas.

A nitrogen budget is a tool for assessing utilization efficiency in a cropping system, as well as for assessing the risk of losses to the external environment. It is also a tool for evaluating the effects of different management options. To make reasonable budgets, reliable data are needed on nitrogen inputs and outputs. Inflow of nitrogen through symbiotic nitrogen fixation is often a weak point, which means that budgets may become unreliable. This is particularly evident in organic production systems where the primary inflow of nitrogen is largely through symbiotic fixation in pastures and fodder or green manure leys, or in other leguminous crops.

Dahlin AS, Stenberg M & Lindström B. 2009. Dinitrogen fixation in trimmed and intact leys and the fate of fixed N in above- and below-ground compartments. Proceedings from the 16th Nitrogen Workshop, June 28 - July 1st 2009, Turin, Italy.