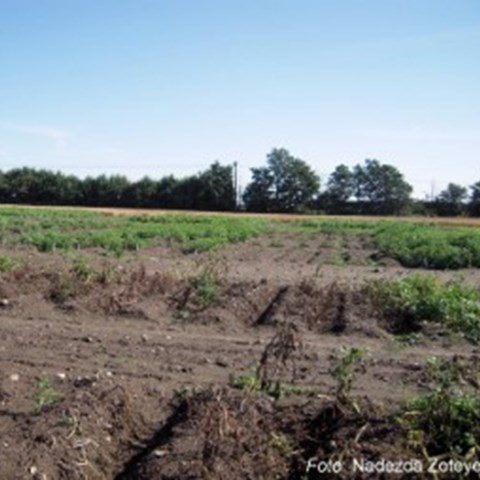 In the foreground different potato cultivars infected by late blight and in the background resistant interspecific hybrids from wild species.

In opposite to most potato cultivars of today many wild Solanum species are rich sources of resistance genes to P. infestans. Only a limited amount of the biodiversity has been used. In addition to several QTLs, around fourty different R genes conferring resistance to P. infestans have so far been found in different potato species. Today there is a renewed interest to combine multiple resistance genes to develop cultivars with a more durable resistance. The approach to use traditional hybridization techniques combined with marker assisted breeding to achieve adequate pyramiding of resistance genes from different sources to prolong the durability is well in agreement with organic principles.

In our project offspring from interspecific crosses between late blight resistant accessions from species like S. berthaultii, S. neoantipoviczii, S. ruiz-ceballosii, S. guerreroense, and S. tuberosum subs. andigenum as well as the hybrid S. microdontum × S. tarijense will be examined for the presence of different R genes and QTLs for resistance with the help of molecular markers. With guidance from the received results hybridizations with the goal to add additional resistance genes to these genotypes will be performed.

This breeding germplasm will later on be utilized in the already existing breeding program at the Department of Plant Breeding, SLU Alnarp, to aid the development of new Swedish cultivars suitable for organic production.

Due to the large susceptibility to many pests and diseases potato is one of the most problematic crops in organic agriculture. One of the worst threats is late blight caused by Phytophthora infestans. The alternatives in organic growing systems to reduce the damage of this oomycetecomes down to the use of early maturing cultivars or to kill the haulm early, before the attack. Another alternative is resistant cultivars. Unfortunately the number of such cultivars is low.

Today the organic sector is more or less dependent on cultivars from breeding programs for conventional agriculture. Even if many of the requirements of organic potatos are the same as for conventional, yield still has top priority in conventional production. At present this can not be first priority for organic growing systems. Here top priority instead has to be on late blight resistance, nutrient-efficiency and earliness.

Final Report 2020 (In Swedish with summary in English)