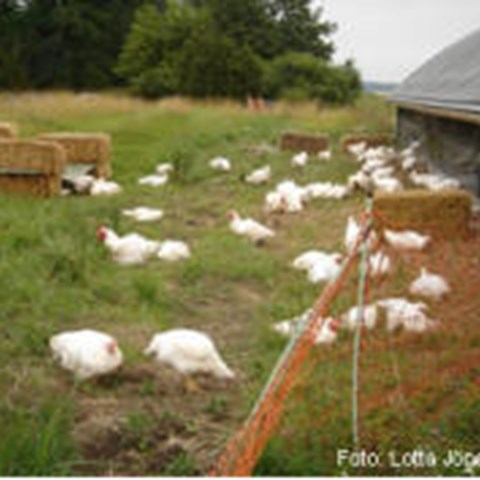 Fish meal is used as a protein source in feed in organic production but there is public opinion that fish should be left for human consumption. Today there is no KRAV-approved fish meal and the situation will become even more complicated if the requirement to permit only diets with 100% approved feed raw materials comes into force, before there is an alternative to fish meal.

Mussels (Mytilus edulis) are a potential ‘new’ animal protein feed source in poultry feeds, regarding protein level and quality, as well as having the potential to be KRAV-approved. Mussels could be an alternative to fish meal. In Sweden we produce about 1 800 tonnes of mussels every year. Mussel cultivation has positive environmental effects and could make it possible to remove nitrogen from waters on the west coast of Sweden. However, after hot summer periods, mussels may be temporarily contaminated with toxins caused by bloom events of toxic algae. This is the largest threat to the development of financially viable mussel farming in Sweden. In a pilot study, laying hens were fed mussels containing toxins. No negative effects on the birds were observed.

The aim of the study is to evaluate mussel meal (with and without algae toxins) as a protein source in feed for poultry. Traditional methods for feed evaluation will be used in both conventional and organic production systems. The study will also include hens of different genotypes.

This project is a co-operation with Formas, 'the Swedish Research Council for Environment, Agricultural Sciences and Spatial Planning' and with 'Kristineberg Marine Research Station'.

The project is a PhD study with Lotta Jönsson as postgraduate student.

Read about mussel meal to broilers

Poultry has higher requirements for sulphur-containing amino acids (especially methionine and cysteine) than any other food-producing animals due to the plumage protein. This is a minor problem in conventional poultry production, where diets are supplemented with pure (synthetic) amino acids. In organic animal production, however, such additions are not allowed, giving a dependence on special methionine/cysteine-rich protein sources.

The following articles are also included in the thesis: