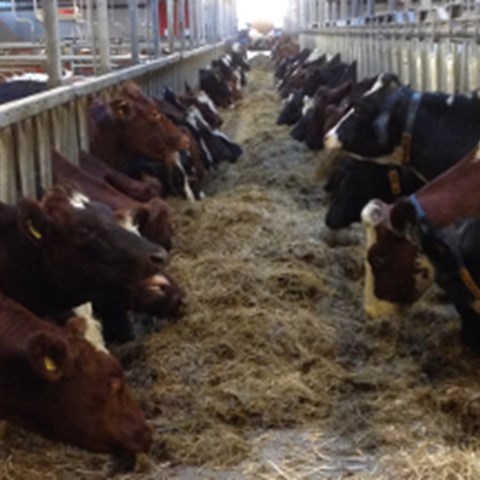 Does it improve animal welfare in organic dairy herds?

Total mixed rations (TMR), when all components in the diet are mixed together, may be beneficial especially for organic dairy herds, as it facilitates the use of homegrown protein feeds, which often are rich in starch and thereby can cause rumen disturbances when fed separately.

When feeding a TMR to cows in groups, there is a risk that the high-ranked cows may sort the diet and eat the more palatable concentrate parts to a higher extent than the roughage, leaving a less energy dense mix to the low-ranked cows. This makes the diet different for different cows and the intended and the consumed feed ration is not the same. This may also cause conflicts between cows when new feed is distributed.

A way to handle this risk is to make the feed mix more homogenous and dense, by soaking the concentrates and mixing the diet more thoroughly. However, this often results in a decreased particle size, which could possibly result in decreased rumination and decreased pH in the rumen. A positive effect could be that the homogenous feed reduces the eating time, thus giving the cow more time for resting and ruminating and for high-yielding cows in free stall systems, time is often limiting.

This is studied in two different experimental change-over trials using both individual- and group feeding.

Final report 2021 (In Swedish with summary in English)

Lindberg M, Kronqvist C. 2018. Compact total mixed ration – effects on feed intake, rumen pH and milk production in dairy cows. Proceedings of the 10th International Symposium on the Nutrition of Herbivores 2018. Herbivore nutrition supporting sustainable intensification and agro‐ecological approaches. Advances in Animal Biosciences. This book is part of a series, which is a companion to the journal ANIMAL. Abstract 750 and Poster.