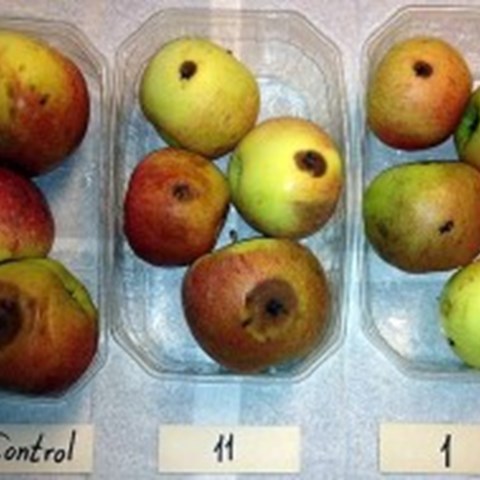 Storage diseases caused by different fungi can lead to considerable economical losses in commercial apple production. This becomes especially severe in organic production where approved and efficient plant protection compounds are missing. In an SLU EkoForsk-project in 2011–2012, we (SLU-Balsgård and the Chemistry Department, Lund University) developed and tested a compound from rye bran.

The active ingredient is a type of phenolic lipid, alkylresorcinols (ARs). Newly harvested fruit, which had first been inoculated with spores of common storage diseases like blue mould, bitter rot and bull’s eye rot, was subsequently sprayed with different AR-solutions. The best of these solutions resulted in significantly smaller symptoms when the fruit was evaluated after some weeks of cold storage. In a small field trial in 2013, AR-solutions were also sprayed onto organically grown trees of Aroma three weeks before harvest, which resulted in significantly fewer damaged fruits both at harvest (Monilinia fructigena) and after harvest (especially Neofabraea – the most serious storage rot).

In this new project, a block trial with 24 organically grown, 10–15 year old Aroma trees will be treated in 2014 with our best solution, AR1:

Controls will include both unsprayed trees and trees sprayed with all ingredients except the AR. In 2015 a second apple cultivar will also be used. In addition, some newly harvested fruits from each AR x treatment will be subjected to various combinations of inoculation with two different fungi and to AR post-harvest treatment. If these analyses yield promising results, we will then apply for funding to develop methods for large-scale production and application of the AR-containing solution with a standard fruit spraying equipment.

Read about the first part of the project