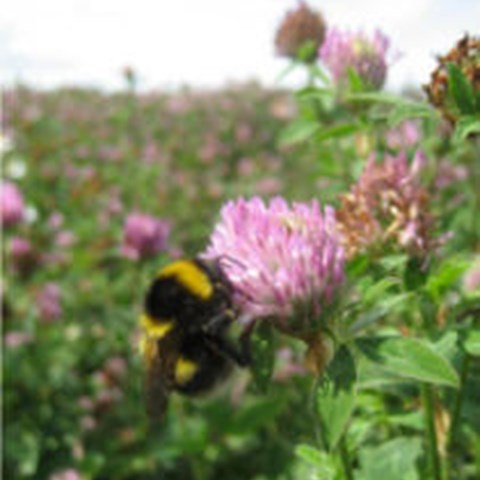 Pollination by bumblebees in particular is improved if a flower resource is provided early in the season, so that the population increases in time for flowering of the clover. The aim of this project is to demonstrate the importance of biological diversity in arable fields and in the surrounding landscape for degree of pollination. We intend to investigate the possibility of improving pollination of red and white clover by sowing in rows of early-flowering plants. We will also investigate whether this contributes to increased parasitism and predation on pest insects.

The experiment will be repeated in a second year.

This project forms part of a larger programme of studies of pollination and biodiversity that also includes a Formas-funded project. We expect the results to be applied to increase the degree of pollination of clover seed crops using relatively simple cropping measures. In addition, knowledge of the importance of the surrounding landscape should provide an indication of when and where these extra measures are relevant. Overall, the project should contribute to higher and more stable yields of clover seed.

A PhD student is associated to the project.

Access to clover seed poses a bottleneck in efforts to meet the demand for organically produced clover. Insufficient insect pollination can severely restrict yields of red and white clover seed, while yields can increase by 600-700% when honeybees and bumblebees are present. The importance of access to wild insects such as bumblebees has increased, since beekeeping has strongly declined.