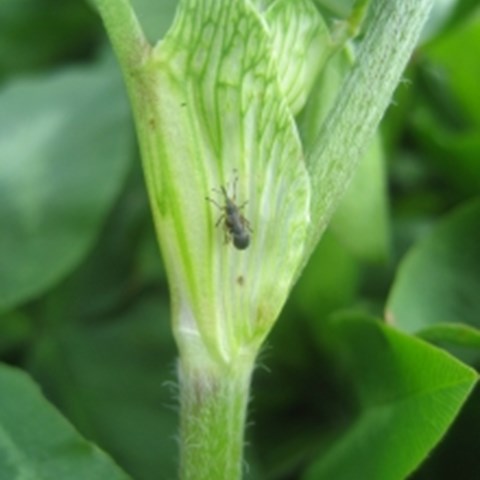 Development of odor-based strategies for control

Long-term pest management is crucial in sustainable agriculture, assuring that both ecological and economical aspects are taken into account. In organic farming it would be of particular interest to use odor-based control methods, involving manipulation of the chemical signals used by the target species for communication. Such pest control also has the advantage that negative effects on beneficial insects, e.g. pollinators and natural enemies of the pest insects, will be reduced, which could result in higher and more stable yields.

Production of clover seed is fundamental within the agricultural sector, as clover is used in leys to produce animal fodder and as green manure. The latter is particularly important on organically managed farms where the use of inorganic fertilizers is prohibited. The clover seed yield in Sweden is very variable between farms and between years, which results in negative economical consequences for seed producers, such as unpredictable production, increased storage costs and seed shortage. The reason for the unpredictable seed yield is not fully understood, but it is confirmed that seed-eating pest insects, predominantly Apion weevils, can cause yield losses of over 50 %. The weevils are traditionally controlled by pyrethroid insecticides with limited success, while no established control measure exists within the organic sector. Pest management in clover seed production would thus be particularly well favored by developing odour-based strategies to control these weevils, which is the end goal of this project.

The project will focus on the specific goals:

Summary of the Final report 2014