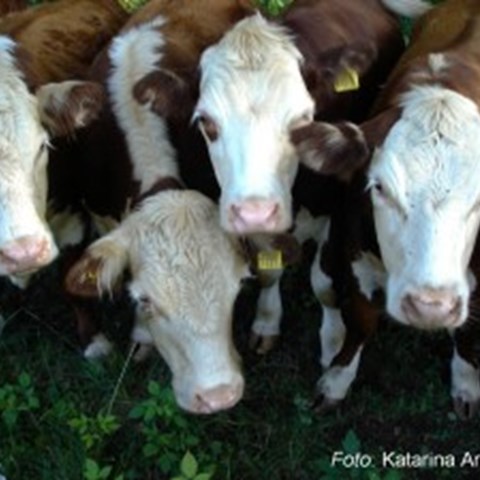 The goal of this project is to develop a novel method for animal health monitoring for grazing cattle. It will be based on a system for unmanned automatic precision weighing when kept on pasture, where alarms are obtained for animals with abnormal weight gain curves. The project focuses primarily on the detection of pasture borne parasite infections in calves, but the method could be further developed to include other diseases that impair animal growth performance. Thus we will try out if a new mathematical model of weight gain can be used for early detection of parasitic infection in calves.

At alarm, so called targeted selective treatment (TST) will be undertaken. This means that only the affected individuals are dewormed with an anthelmintic. An advantage of the TST approach is that the use of anthelmintics is minimised, which is in accordance with the rules of organic production. Comparison with conventional visual monitoring will be done, where our hypothesis is that the unmanned precision monitoring is better and reduces the use of anthelmintics. The method leads to increased animal health and productivity in livestock grazing biodiverse semi-natural pastures in organic production systems without prophylactic mass deworming.

The project is a collaboration  between SLU with Götala beef and lamb centre and the company Hencol AB.

Grazed semi-natural pastures are of great importance for the conservation of biodiversity in the Swedish agricultural landscape. Sustained biodiversity in pastures, however, requires management and thus grazing animals. As an effect of a declining number of potential grazing livestock, it has become increasingly difficult to maintain the management on these lands and thereby reaching the Swedish environmental goals. For farmers to choose to keep the animals on the semi-natural pastures and not on arable land or indoors requires, however, satisfactory production results on the pasture.