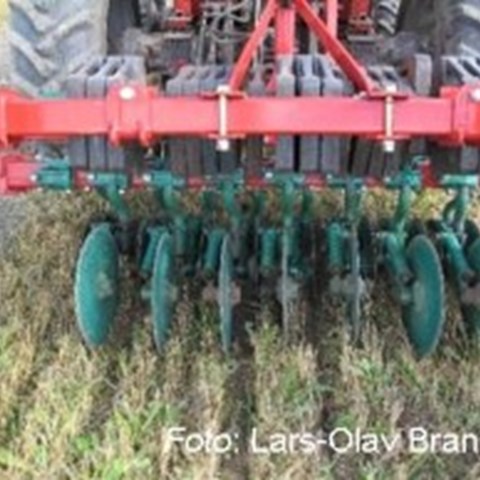 The control of couch grass in organic farming is largely based on repeated soil cultivations in autumn, i.e. during a period when tillage should be avoided due to the risk of causing increased nutrient leaching. The energy input for stubble cultivation exceeds by large the input needed for chemical control in conventional farming. Thus, intensive direct control of perennial weeds in organic agriculture is in clear conflict with the environmental goals of reduced nitrogen leaching and reduced use of fossil fuel.

We aim to contribute to the development of an organic agriculture with less use of soil tillage to control couch grass, by introducing a system were couch grass is controlled by a combination of competition, mowing and spading (spading = making parallel slits in the soil).

The objective of this project is to determine the importance of companion crop, cutting and spading strategy. We would also like to determine if the time from early spring to suitable time for winter rape and winter wheat sowing is enough or if the whole season is needed to achieve satisfactory effect. In a pilot study conducted within the EU project OSCAR (Optimizing subsidiary crop applications in rotations) we have found that the amount of couch grass rhizomes late in autumn can be reduced by repeated cutting of a clover sward during summer and, more interestingly, that the effect can be strengthened by spading (with a spade) once in early summer.

We will start one experiment in 2014 and 2015, respectively, on an organic farm with a good stand of couch grass in Uppland. The four factors, companion crop, first spading, cutting and second spading will be investigated. The sub-plot size will be about 2m by 2m. A prototype machine developed by Bioforsk and Kverneland will be used for the spading.

During 2017 and 2018 the system will be tested in leys which were established 2016 in barley. These will be the first trials performed under realistic field conditions.

Final report 2021 In Swedish with summary in English.

Publications with close connection to the project