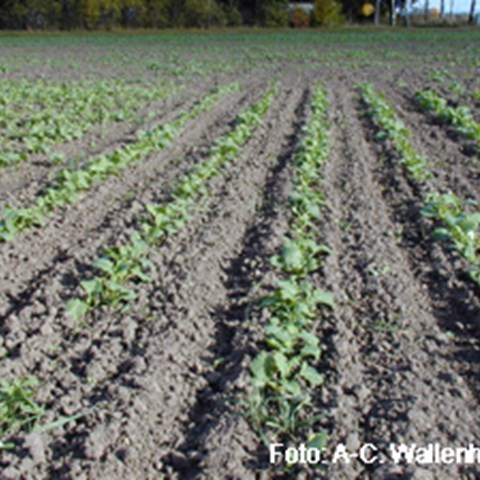 Organic production of oilseed crops (oilseed rape and turnip rape) in the past has been of modest proportions, with approx. 100 ha being harvested annually at the end of the 1990s. Cultivation has since increased, to 300 - 400 ha in 2000 and around 1 200 ha in 2001. Since autumn 1997, when the price of organically produced soya increased, market interest in organic oilseeds has been high. Since KRAV regulations require an increasing proportion of KRAV-approved feed, organically produced rapemeal will continue to be of interest to both milk and pig producers. The need is estimated to be 2 000 tonnes for milk production alone, corresponding to a crop acreage of approx. 1 500 ha.

Growing of oilseed crops is associated with a range of difficulties, including the high N requirement of the crop, pest insects (particularly pollen beetle and rape beetle) and subsequent volunteer oilseed plants.

Documentation of growing in the period 1997-2001 revealed large variations in yield levels and cultivation technology problems. The yields measured varied between 200 - 3 200 kg/ha. The highest yield levels were obtained when slurry was supplied or when the pre-crop was a legume crop. Most cultivations were sown with 12 cm row spacing and no measures were taken to control weeds. Pollen beetle incidence was low in most cultivations. In parts of Östergötland and Västergötland where resistance to insecticides has been demonstrated, damage has increased in recent years.
Experiences from conventional cropping and research activities have provided advisory guidelines as regards e.g. seed drilling techniques. We are investigating the effects of various row spacings on weed incidence, N-mineralisation and yield in organic winter oilseed crops in areas where winter oilseeds have reliable overwintering. Three trials (L7-818) are established annually in which the rape is sown at 12, 24 or 48 cm row spacing. Weed howing is being carried out in the 24 and 48 cm crops twice in the autumn and once in the spring.

Strategies for reducing the density of volunteer rape are being investigated in a separate trial (L7-819). Work begins in the spring in an existing winter oilseed crop through establishment of a catch crop. Thereafter winter wheat or spring cereal is sown. These trials are a valuable extension of project Dnr 25-5306/01, which aims to provide a more reliable basis regarding where the risk of winter dieoff exists each year.

During the course of the project, contact is being made with several groups of farmers in accordance with the model for participatory research. These groups are providing valuable opinions on the results and through the combined experiences from the field research and their own experience they are suggesting refinements of the work for the future.