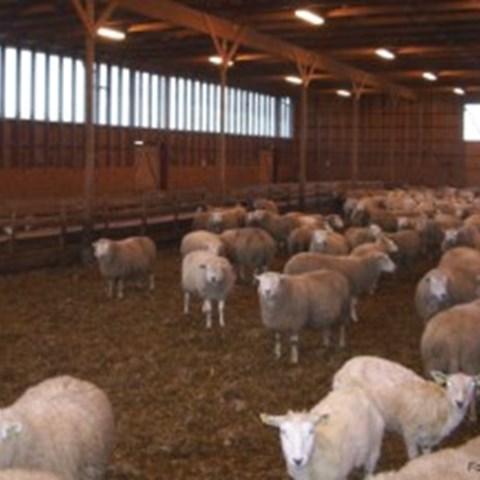 Swedish lamb production is increasing (from around 200 000 ewes in 2001 to almost 300 000 in 2012). About 20% of the production is organic. In winter, most Swedish sheep are kept indoors on deep litter bedded with straw.  It is important to optimise the farm nutrient balance, especially in organic production, but knowledge about plant nutrient content and nitrogen losses in deep litter manure from sheep is scarce. If there is a composting process in the deep litter, the amount of bedding material needed to keep a good animal environment can be reduced. This process can however lead to increased gaseous losses.

Cereal straw is the most common bedding material, but some years it is expensive and hard to obtain. Reed canary grass (RCG)  may be an alternative, however farmers have both negative and positive experiences of it. The aim is to quantify the plant nutrient content of deep litter from Swedish lamb production, as well as the loss of nutrients.

During two housing periods straw and RCG will be compared as bedding material for 30-36 ewes in 2 x 3 pens.

All bedding material will be weighed and samples of feed and straw/RCG analyzed for nutrient content. Dust at straw/RCG distribution will be measured. The temperature in the beds will be monitored. After each period the beds will be weighed and samples taken for nutrient analysis. Plant nutrient balances will be calculated. The influence of composting will be studied by storing the deep litter outside after the first year, and inside after the second season. An economic evaluation will be made.

Final Report 2018 - Abstract. The complete report can be found on the Swedish page.