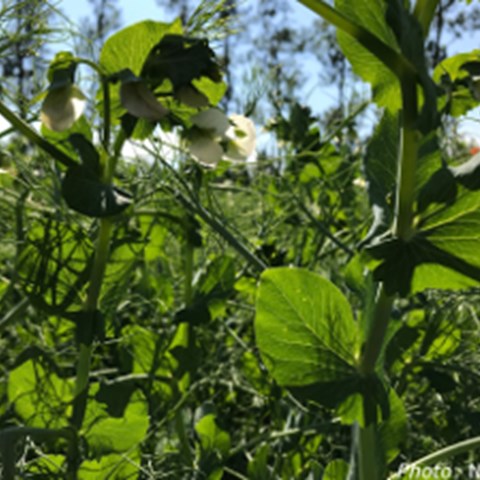 Pea, a crop that can be severely affected by root diseases. Can the disease risk be prevented by varietal choice and intercropping? Photo: Nicolas Carton.

There is variability in the level of resistance to root rots among varieties of several legume species, however many species and varieties used in innovative cropping systems have not been characterized. Diversification by intercropping with non-host species has been shown to reduce root pathogen occurrence in some crop species but references are very scarce for grain legumes.

Moreover, it is not known if the combination of both strategies, i.e. using resistant legume varieties in mixtures with non-host species will lead to more efficient disease prevention than each strategy applied separately. Additional practical experience is required in order to give Northern European farmers clear recommendations.

This project will therefore investigate root diseases caused by Aphanomyces euteiches, Fusarium and Phytophtora pisi on different varieties of

grown as sole crops and intercropped with non-host species. Measurements of pathogen occurrence and disease severity will be performed in one greenhouse screening and in two field experiments.

The project is expected to generate results for direct implementation in design of organic cropping systems where legumes are included both as cash and cover crops, and thereby contribute with a large part of the nitrogen supply.

There is a need for improved knowledge about management practices that prevent the build-up of soil-borne diseases in cropping systems that contain both grain legume main crops and legume cover crops. Combining the effects of varietal choice and species mixtures can be expected to be an efficient way to prevent diseases, but the combined strategy has not yet been evaluated for soil-borne legume diseases in Sweden.