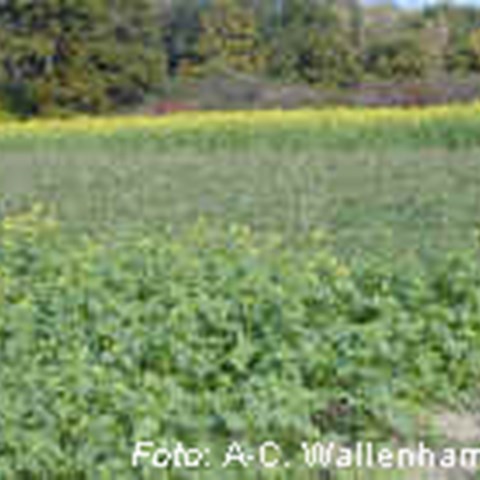 High protein content through combination of preceeding crop and fertiliser

Organically grown quality wheat is in short supply on the market and meeting the demands of flour millers is very difficult at the present time. A common strategy in organic wheat growing is to take the benefit of nitrogen-fixing preceeding crops. However, after break-up of leys or other soil tillage, the risk of nitrogen losses is great. The picture shows white mustard as a catch crop

In a five-year project, the after-effects of a clover/grass ley were investigated at different times and combined with sowing of a catch crop. The highest yields and protein contents were obtained when the ley was ploughed under at the beginning of August. However, the technique for establishing the catch crop can be improved and herein lies potential.

Supplying nitrogen in the form of different organic fertilisers before sowing and in the growing crop is another potential method to improve nitrogen availability to the wheat, since cumulative experience has shown considerable differences in nitrogen mineralisation rates between different products and types of animal manure.

A third option is to use different soil tillage measures during the growing season to stimulate soil processes in general and nitrogen mineralisation in particular. Research has shown e.g. that row hoeing promotes protein storage. However, different wheat cultivars react differently. In this project, we are combining different nitrogen supply strategies in different ways and investigating the effects on yield and protein content of both spring and winter wheat.

The following sub-projects are included:

Preliminary experiments have shown that greater row spacing and restricted seed rate combined with row hoeing produce considerably higher protein content in wheat with an acceptable reduction in yield. However, different cultivars react differently. In experiments in 2002 at four different sites/regions, spring wheat at various row spacings was investigated with one to three harrowings to 12 cm and two row hoeings at 24 or 36 cm row spacing. The cultivars Dragon, Svenno and Ölänskt wheat were included. Weed competition, straw and grain yield and quality were evaluated.