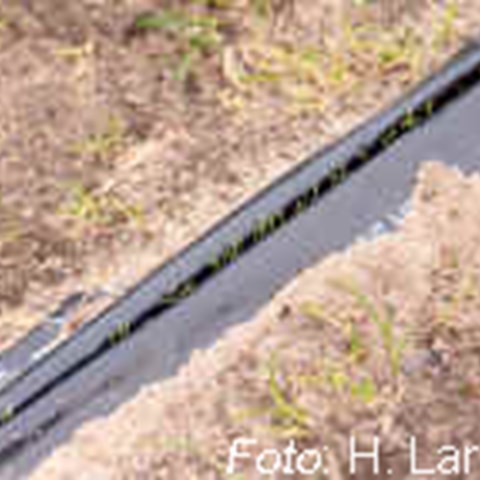 Soil cover with plastic at time of sowing

The problem with weeds in row crops is most acute around the actual plants in the row. In organic growing, the labour input for hand weeding is 150 hours/ha in sugarbeet and 300 hours/ha in carrots. Further improvement of organic growing requires new methods for weed control with a radically reduced input of labour costs.

The Danish company Holmgaard Innovation has developed a machine for mulching with plastic in conjunction with sowing of e.g. sugarbeet. In some small investigations the equipment has proven to function so efficiently that it can represent a breakthrough for the possibility of controlling weeds without the use of herbicides. However, there is still a lack of basic knowledge regarding the ability of the equipment to control weeds, the effect on germination of the commercial crop and the effect on pests. The production of important basic data and an objective assessment of the machine are preconditions for a breakthrough in new sowing technology in organic growing.

In a minor pilot trial at Alnarp, with sugarbeet, onions and carrots, the machine was tested in 2001, but the resources were not available to monitor the results more closely. The carrots and onions emerged in reduced stands but without weeds in the row, while the sugarbeet germinated poorly and was eaten by birds as a result of late sowing. We aimed to investigate the sowing of a range of different crop seeds such as sugarbeet, onion, carrot, cabbage, etc. with the new sowing technology. This investigation was carried out in conjunction with the manufacturer Holmgaard Innovation and took place in organic growing at Alnarp during the 2002-2004 seasons.

In the investigation, we evaluated:

The investigation was carried out in the form of one controlled field trial per year, with statistical treatment of the parameters studied.