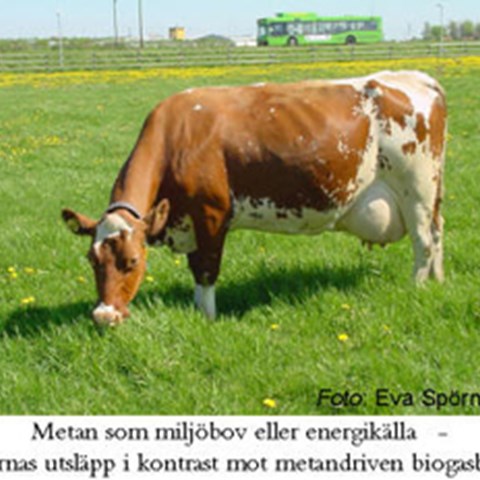 Effects on milk and methane production

Only few protein feeds fulfil the requirements and rules for feeding in organic milk production and these feeds are often high in price and limited in supply. Starting 2008, organic milk producers are required to supply the cows with 100% organically produced feed.

As organically produced feed is scarce on the market and holds a high price this new regulation makes it increasingly important for the organic producer to produce his/her own feed. It is therefore important to investigate if today’s high quality roughage, combined with only cereals (all home grown feeds) can offer an economically interesting production alternative for the organic milk producer compared to the current rations based on a considerable amount of purchased organic protein supplements.

As protein may be a limiting factor in these forage/cereal rations, it is likely that the proportion of legumes in the forage will be an important factor for the production outcome. Clover has been shown to give high feed intakes and high milk yields and to influence the fatty acid composition of milk in a favourable way by increasing the levels of polyunsaturated fatty acids, especially α-linolenic acid.

Large quantities of forage in ruminant diets have been shown to increase the emission of the green-house gas methane but measurements performed on high producing dairy cows that are fed high quality roughage are scarce.

Therefore, measurements of the amount of methane gas emissions from cows on the three diets with different roughage levels are planned, in two methodological studies. These measurements will be performed in cooperation with the department of microbiology, who has recent experience in performing methane measurements in other projects.

The production experiment includes 40 cows during lactation week 1-20 and will take place during the indoor feeding period 2009/2010. It is planned as a factorial experiment with two types of forage:

and two types of concentrates:

The concentrates are fed according to production in accordance with the rules of the Swedish organic control organisation “KRAV” and roughage will be fed ad libitum throughout the experiment. Measurements of the effects on milk production, milk composition and the processing qualities of the milk are planned.