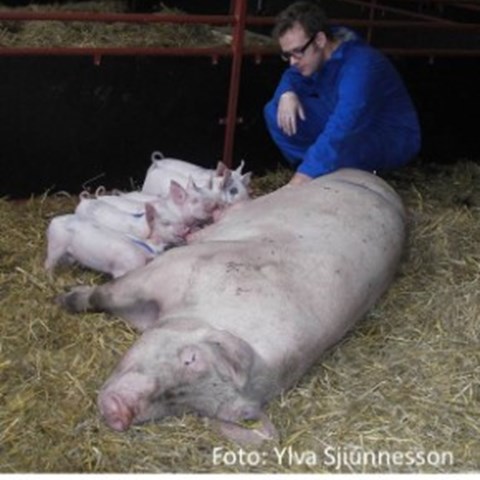 The sows’ possibility to synchronize oestrus after weaning is one key factor for a successful batch-wise breeding system and are fully explored in the conventional pig production. In current organic pig production systems this part of the reproduction biology of the pig has not been explored fully. This project aims to investigate if there are natural ways to synchronize oestrus of sows in organic piglet producing farms.

However studies have shown that sows kept in groups during lactation were more prone to show oestrus and ovulate during lactation than sows kept in individual farrowing pens. This causes productivity difficulties since the batch wise breeding system cannot be maintained because there is no synchronization of oestrus after weaning opposed to conventional production systems. There is also a risk of endangering the within-farm-disease-control as an increase of mixing of piglets of different ages is a consequence of unsynchronized oestrus.

It is well know that boars emit signals that induce oestrus among sows. A study conducted in Denmark showed that a restrictive and controlled presence of a boar could induce oestrus during lactation.

The hypothesis is that an introduction of a boar during lactation could induce oestrus in receptive sows. If the time point can be successfully adjusted it might be possible to synchronize most of the sows after weaning, thus making it easier to maintain a batch-wise breeding system

The project is collaboration with the Swedish Animal Health Service and is an attempt to create well documented recommendations that will be used to create a more robust organic pig production without tampering with animal welfare.

Ylva Sjunnesson
Lecturer at the Department of Clinical Sciences; Division of Reproduction

Abstract to the Final report 2018