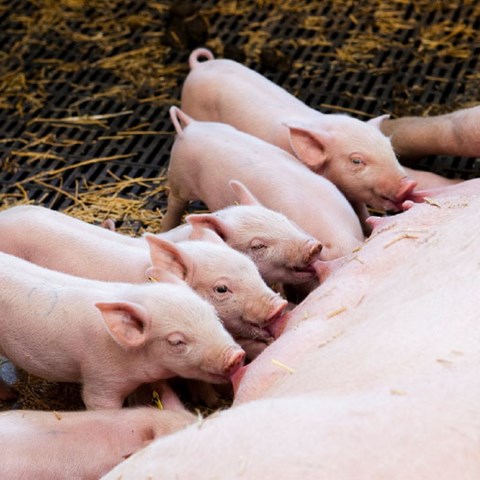 Artificial insemination is widely used to breed the vast majority of dairy cows, pigs and turkeys in Sweden.

In fact, this is the most widely used reproductive biotechnology globally, enabling healthy livestock to be produced more efficiently, using fewer resources and emitting fewer greenhouse gases per kg of milk or meat produced than by natural mating. It is also used, but to a lesser extent, to breed beef cattle, sheep, sport horses and some dogs, and also in conservation breeding.

Good results can be obtained by artificial insemination if the females are healthy, managed appropriately, and inseminated at the right time relative to ovulation. Most importantly, good quality sperm samples must be used. Sperm quality in semen doses can be improved in various ways, including by selecting the most robust spermatozoa that are most likely to be capable of fertilization. This selection can be achieved by colloid centrifugation, or centrifugation through one layer of colloid (Single Layer Centrifugation or SLC), a method optimised for various species by the group leader, Professor Jane Morrell.

In addition, the group´s work focuses on identifying the best way of predicting fertility, either at the individual male level or at the ejaculate level, and on determining the role of external factors, such as season of year, on sperm quality. Another important issue is the effect of bacteria and viruses in semen on sperm quality and on the inseminated female. All of these aspects are important from a One Health perspective.

A hidden use of antibiotics - in animal breeding!
Despite the advantages of artificial insemination over natural moating, there is a  disadvantage  - the addition of antibiotics to semen extenders. Antibiotics are added to inhibit bacteria contaminating the semen during collection and processing. However, these antibiotics may promote development of antibiotic resistance.

The project will study various aspects of this problem, from determining which bacteria are actually present in the semen of healthy males, and their effect on sperm quality during storage, to investigating the effect of these antibiotics on the microbiota of the female reproductive tract. Alternatives to antibiotics will be investigated, such as low temperature storage of boar semen, physical separation of spermatozoa from bacteria in semen using a colloid, and potential novel plant-based antibiotic substances that could be used in place of conventional antibiotics.

Almost all ejaculates contain some bacteria; therefore, antibiotics are added to semen extenders used to prepare semen doses for artificial insemination, according to governmental directives, to inhibit bacterial growth. Semen extenders support sperm survival during preservation but also serve as a nutrient medium for bacterial growth. These bacteria cause sperm quality to deteriorate by producing metabolic byproducts and toxins, and may even cause disease in inseminated females. However, addition of antibiotics represents a non-therapeutic application and goes against current recommendations on their prudent use. Since most of the inseminated liquid passes out of the female into the environment, the normal flora of the female and bacteria in the environment are exposed to the antibiotics in the extender.

A further issue is that the efficacy of these antibiotics against the microorganisms found in semen is now being questioned. Viable bacteria were detected in boar semen despite the presence of antibiotics in semen extenders, as well as in frozen semen from bulls and stallions. Alternatives to antibiotics in semen extenders are clearly needed. A possibility would be to remove the contaminating bacteria by physical means immediately after semen collection, such as with colloid centrifugation.

A sperm preparation technique, Single Layer Centrifugation through a colloid, was developed previously by the PI. Using this technique it is possible to separate spermatozoa from most of the bacteria in boar and stallion semen samples. However, since only robust spermatozoa pass through the colloid, some are lost during the process. If lower density colloids were used it was possible to separate boar spermatozoa from bacteria without having a detrimental effect on sperm quality. In fact, sperm quality was better than controls when sperm samples were stored for 7 days at 17 °C.  Now sperm fertility must be tested in artificial insemination.

Hypothesis
centrifugation of boar semen using a low density colloid will separate spermatozoa from bacteria without adversely affecting sperm quality. The resulting sperm samples will not have an adverse effect on uterine health or fertility in inseminated sows.

Relevance of the project
Globally there is concern about the spread of antimicrobial resistance. The emerging resistant bacteria are threatening our ability to treat common infections in the human population, resulting in prolonged illness, lengthier stays in hospital and requirement for more intensive care. Similarly, some infections in animals are proving to be difficult to treat because of resistance to antibiotics. The method of preparing boar semen under investigation could remove most of the bacteria from the semen without promoting antimicrobial resistance. Animal health, human health and the health of the environment would all benefit.

Financing
Previously financed by a pump grant from the Society for Reproduction and Fertility Jan 2018 to Dec 2020. Now financed by Carl Tryggers Foundation Jan 2022 to Dec 2024.