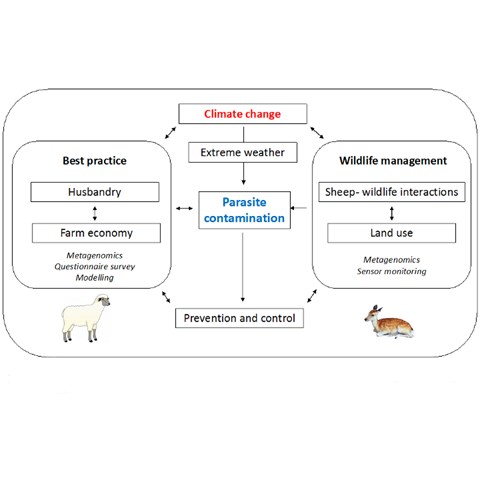 Extreme weather due to climatic change has an impact on sustainable agriculture and economy. Simultaneously, human population growth increases the demand for agricultural products, which calls for an increase in production efficiency. Gastrointestinal (GI) parasites are a problem for animal health and welfare, and a major constraint on efficient livestock production. In a changing climate, GI community may cause severe economic consequences for farmers.

Using sheep as a farm animal model, this interdisciplinary project aims to study the effects of extreme weather events on the nematode community, wild cervid ecology and farmers’ decisions and economy. With Next Generation Sequencing (NGS), whole nematode communities from samples of sheep and cervids can be sequenced and the data will be used to describe nematode communities. In the contact between livestock and wild hosts, horizontal transfer of GI nematodes is possible. To investigate nematode transfer, GPS-data will be analysed to identify factors contributing to parasite community interactions between sheep and wildlife under different weather conditions. A factor that needs to be considered is farmer decisions on land use, prevention and mitigation, which will affect GI nematode infection; this will be investigated via questionnaire to sheep farmers. It is of great importance for farmers to minimize GI nematode infections to maintain Sweden’s high levels of animal welfare while maintaining economic viability.

The purpose of this project is (i) to investigate parasite species community structure in domestic (i.e. sheep) and wildlife hosts (i.e. cervids such as roe deer and fallow deer) using metabarcoding technologies and animal movement data, (ii) to study how farmers deal with clinical parasitism in their livestock both from practical and economic points of view in relation to climate-driven changes (Fig 1).