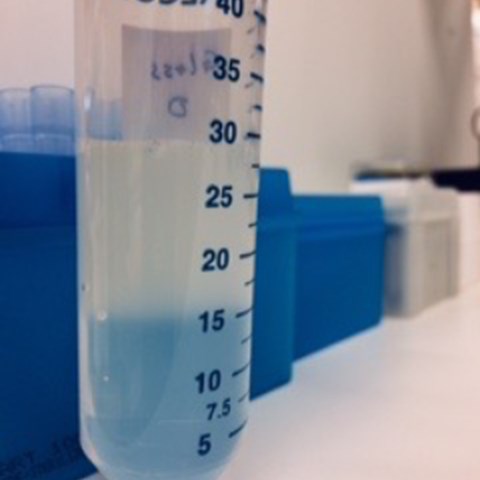 The picture shows 15 mL extended bull semen layered over 15 mL low density Bovicoll in a 50 mL tube prior to centrifugation.

The purpose is to test whether Single Layer Centrifugation can be used to separate bull spermatozoa from bacteria in semen. This project is a continuation of two other projects.

As shown previously for stallion and boar semen, and subsequently to investigate whether a low density colloid could be used for this purpose without having a detrimental effect on sperm quality.

Relevance of the project
Globally there is concern about the spread of antimicrobial resistance. The emerging resistant bacteria are threatening our ability to treat common infections in the human population, resulting in prolonged illness, lengthier stays in hospital and requirement for more intensive care. Similarly, some infections in animals are proving to be difficult to treat because of resistance to antibiotics. The methods of preparing bull semen under investigation could either i) remove most of the bacteria from the semen without promoting antimicrobial resistance, at the same time as robust spermatozoa with a good fertilizing capacity are selected, or ii) separate spermatozoa from seminal plasma and most of the bacteria, if a low density colloid is used. Animal health, human health and the health of the environment would all benefit.

The microbiome of bull semen